Iran says to back UN efforts to end Yemeni war

TEHRAN, August 12, YJC - Iranian Deputy Foreign Minister for Arab and African Affairs Hossein Jaberi-Ansari said the country backs efforts made by the UN to bring an end to Yemen's war. 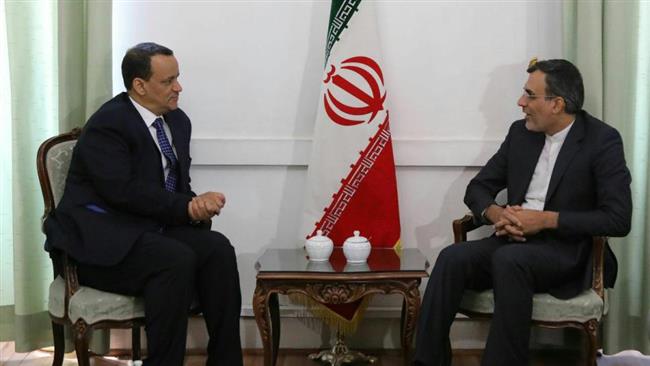 TEHRAN, Young Journalists Club (YJC) - In a meeting with the United Nations Special Envoy for Yemen Ismail Ould Cheikh Ahmed in Tehran on Saturday, Ansari raised concerns about the catastrophic situation in Yemen.

The UN envoy, for his part, informed Jaberi Ansari about the latest developments concerning the humanitarian situation in Yemen as well as his recent talks to revive efforts aimed at finding a political solution to the Yemeni crisis and called on Iran to support such bids.

The two officials also exchanged views about new initiatives for a solution to the political stalemate in Yemen.

The UN envoy arrived in the Iranian capital, Tehran, on Saturday to discuss the Yemeni conflict with Iranian officials.

Yemen has been facing war by a Saudi-led coalition since March 2015. Leading a number of its vassal states, Saudi Arabia launched the military aggression on Yemen to eliminate the Houthi Ansarullah movement and reinstall a Riyadh-friendly former president. The war, however, has failed to achieve either of the goals, morphing into a protracted conflict and causing a humanitarian crisis in Yemen.

UN-brokered talks between Yemen’s warring sides have also failed to end the conflict so far.

Iran has repeatedly called for a swift end to the brutal Saudi-led military campaign.