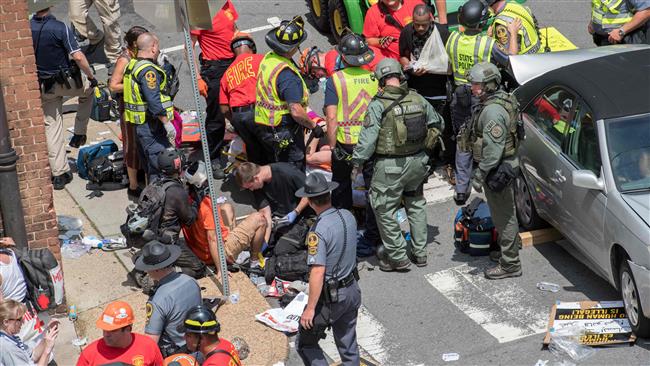 TEHRAN, Young Journalists Club (YJC) -"I have a message for all the white supremacists, and the Nazis who came into Charlottesville today. Our message is plain and simple: Go home. You are not wanted in this great commonwealth. Shame on you,” McAuliffe said at a press conference Saturday.

Earlier in the day, thousands of far-right protesters clashed with groups that opposed them ahead of a "Unite the Right" in Charlottesville, Virginia.

A woman died and 19 people were injured when a vehicle rammed into a crowd of peaceful counter-protesters. Late in the afternoon, a Virginia State Police helicopter crashed south-west of the city, leaving two troopers dead.

A suspect, identified as 20-year-old James Fields from Ohio, has been detained on suspicion of second-degree murder.

In addition to those injured in the car incident, police said 15 others were wounded in other violence related to the white supremacist rally.

"You pretend that you are patriots, but you are anything but a patriot," said McAuliffe, who was flanked by Charlottesville's mayor and police chief.

"We are stronger than you," the governor added. "You have made our commonwealth stronger. You will not succeed. There is no place for you here."

"This tide of hatred and of intolerance and of bigotry that has come to us, and that has marched down with torches the lawn of one of the founders of democracy, it is brought here by outsiders. And it's brought here by people who belong in the trash heap of history with these ideas."

McAuliffe had earlier declared a state of emergency while law enforcement officials worked to disperse the protesters in the college town.

The Democratic governor said he had spoken to President Donald Trump, a Republican, and twice urged him to bring people together.

Addressing reporters, Trump refused to name white supremacists or any specific group, blaming violence "on many sides." The president also ignored a question from a reporter as to what he would say to white supremacists who voiced support for him during the rally.

Former Ku Klux Klan leader David Duke was in Charlottesville and called the demonstration a "turning point." He said the protesters would fulfill the promises of President Trump.

The Saturday rally was organized by a far right group to protest a plan to remove a statue of General Robert E. Lee and call for the protection of Southern Confederate monuments.

Back in February, the City Council voted to remove the statue of Lee, who was leading southern forces against the Union Army in the American Civil War. He has been venerated as a heroic figure in the South.