TEHRAN, August 14, YJC -The commander of Iran's Islamic Revolution Guards Corps (IRGC) says Daesh terrorist forces make up the front-line soldiers of the Zionist regime and the global arrogance has created this Takfiri group to counter the Islamic Revolution. 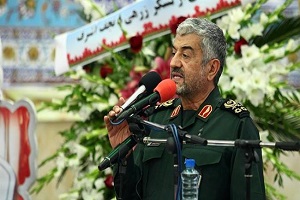 TEHRAN, Young Journalists Club (YJC) -Speaking at a commemoration ceremony held in the central city of Najafabad for Mohsen Hojaji, an IRGC member recently killed by the Daesh Takfiri terrorists in Syria, Major General Mohammad Ali Jafari said, “Enemies regard the Islamic Iran as the focal point of the Muslim movement and have targeted its revolutionary forces, soldiers and the Armed Forces.”

Hojaji, who was a member of the Iranian advisory support team in Syria, was reportedly taken hostage by the Takfiri group near the Syria's border with Iraq on Monday and beheaded two days later.

Jafari further said the resolve of the Iranian nation, the leadership of Ayatollah Seyyed Ali Khamenei, as well as the country's defense prowess and its Armed Forces were the most important pillars of the country’s power.

The IRGC commander added that following the implementation of the landmark nuclear agreement, known as the Joint Comprehensive Plan of Action (JCPOA), signed between Iran and the P5+1 group of countries in 2015, enemies have been constantly seeking to undermine the Armed Forces’ military power.

In a statement on Thursday and following the beheading of Hojaji in Syria, General Qassem Soleimani, who commands the IRGC's Quds Force, said Iranian forces would not rest until they have wiped out every last terrorist from the face of the Muslim world.

He added that the “horrific, inhumane crime” came in the wake of successive blows dealt on several fronts to Takfiri-Wahhabi terror groups, which are tied to global arrogance.

“The atrocity does not fall within any Islamic, or even humanitarian principle or law,” the statement said.

assistance to the respective countries’ armies in their fight against Takfiri terrorists.