US police gear up for right-wing rally in Boston

TEHRAN, August 19 -Hundreds of US police officers have been deployed to the streets of Boston to deter possible violence at a right-wing rally, which is also expected to draw thousands of counter protesters, who fear the event would attract white supremacists, one week after Charlottesville's deadly clashes. 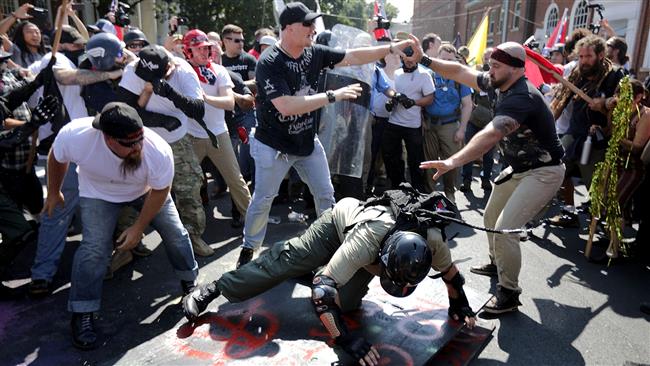 TEHRAN, Young Journalists Club (YJC) -Some 500 police officers are deployed to the city on Saturday to keep separated hundreds of those who are expected to attend the “free-speech’’rally and thousands of expected counter-protesters.

Police officers "expect good behavior but will be prepared should it go bad," CNN quoted one law enforcement source at the Boston Police Department.

Boston has banned weapons of any kind - including sticks used to hold signs - in the rally and closed the streets to avert car attacks like the deadly one, which killed a woman, in Charlottesville last week, authorities said.

The warnings to avoid violence follow the horror of the Charlottesville violence and scenes of neo-Nazis and white supremacists, who took over the Virginia's city streets last Saturday and prompted thousands of others to demonstrate in a counter-rally, which led to violent clashes.

The bloody clashes which led to three deaths and more than a dozen injuries in Charlottesville, ratcheted up racial tensions across the country.

The white supremacist rally was held to protest a planned removal of a Confederate statue of General Robert E. Lee, who was leading southern forces against the Union Army in the American Civil War. He has been venerated as a heroic figure in the South.

In response to the nationalist rally, local demonstrators and anti-racist activists from all over the country were called to Charlottesville to oppose the event.

The violence sparked even a biggest crisis after US President Donald Trump refused to immediately condemn white nationalists, and instead, he blamed the violence on both sides of the conflict.

Trump’s messages has fueled the escalating rhetoric from "alt-right" figures and white supremacists acorns the United States and prompted local and federal law enforcement officials to warn about the potential for more violence in the coming days.

Major cities across the US are bracing for an unusual wave of far-right rallies, while thousands of people vowed to hold rallies in counter demonstrations and in a show of solidarity with Charlottesville..

In addition to Boston rally, and an expected counter-march, protests are also expected to be held in Texas on Saturday.

Thousands march in solidarity with Charlottesville in Portland

In another event in the country, thousands of people took to the streets in the city of Portland, Oregan, in a show of of “solidarity with Charlottesville” on Friday evening.

The rally, which was organized by Local activist group Portland’s Resistance, drew thousands of people, who were marching through the streets of downtown Portland and chanting slogans like, "No KKK, No Fascist USA, No Trump."

The crowd held a moment of silence for people who have died because of racism, including Heather Heyer, who was killed in Charlottesville car rampage last week.