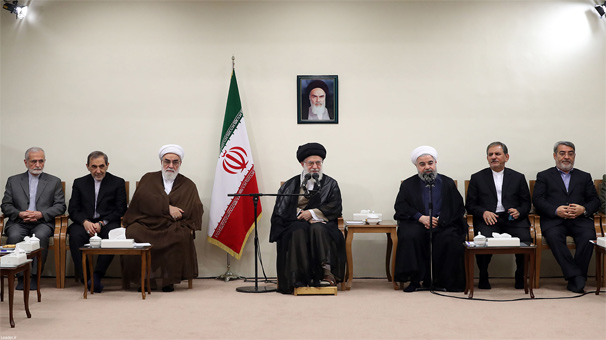 TEHRAN, Young Journalists Club (YJC) - Ayatollah Khamenei made the remarks in a meeting with President Hassan Rouhani and the members of his administration in Tehran on Saturday on the occasion of the Administration Week.

“Economy must be the top priority of all members and sectors of the government,” the Leader said and highlighted the important roles that issues pertaining to banking, investment, liquidity growth and smuggling play in the economy.

Ayatollah Khamenei recommended that the president and members of his cabinet serve the Iranian people and establish close links with them “in order to reach a better understanding of the realities of the people’s lives.”

The Leader stated that Iranian officials must practice patience in the face of critical remarks and show courage to make decisions and implement them, stressing the importance of devising precise scientific plans.

Ayatollah Khamenei further stated that the Islamic Revolution must be a source of honor in diplomatic issues, adding, “We must feel dignified about conforming to national norms, i.e. the norms stemming from the [Islamic] Revolution such as resistance against Arrogant [Powers], fight against oppression and opposition to the hegemonic system.”

The Leader said Iran’s foreign diplomacy must be open to all in the world and must not be focused on relations with just a few countries.

Ayatollah Khamenei urged Iranian officials to act swiftly and wisely in foreign diplomacy and continue to stand up to enemies.

Prior to the Leader’s remarks, President Rouhani presented a report about measures carried out by his administration during his previous term in office and also plans of the new administration.

Rouhani said unemployment and economic issues are the most important problems of the government, vowing to create more than 900,000 job opportunities every year.

He also cited the fight against poverty and realization of social justice as among other objectives of his new administration.