TEHRAN, August 27 - The US military has confirmed that two of the three missiles test-launched by North Korea on Saturday flew successfully, revising an earlier claim that at least two of them had failed. 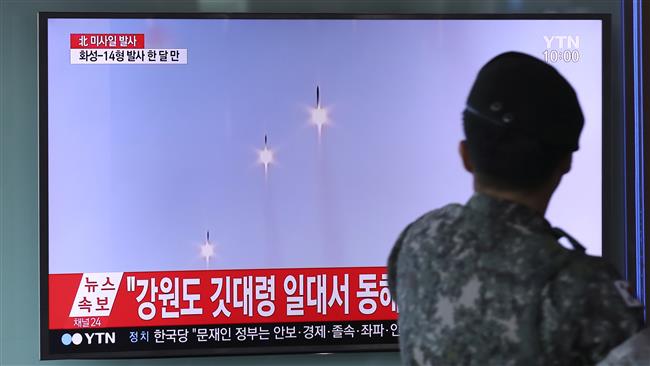 TEHRAN, Young Journalists Club (YJC) - The US Pacific Command confirmed Saturday that North Korea had fired three missiles over a span of 30 minutes near Kittaeryong area and the first and third missile did not fail in flight.

It said earlier that the third missile appears to have blown up immediately.

The official said none of the missiles posed a threat to Guam, the Pacific US territory that Pyongyang threatened to attack in response to a threat amid a heated war of words over the North’s recurrent tests this summer.

The unprecedented threat came after US President Donald Trump warned the North earlier this month that it would be met with “fire and fury” if it continues nuclear and ballistic missile tests.

The Republican president has yet to respond directly to the new test as he was preoccupied with tracking Hurricane Harvey ripping through Texas.

The White House said US military commanders briefed the president on the test and “we are monitoring the situation.”

Guam Homeland Security Advisor George Charfauros said the island territory was going to keep a close eye on the situation.

“Although the launches were no threat to Guam, it reminds us that we cannot be complacent,” Charfauros said. “We place confidence in our US Department of Defense capabilities and continue open communications with our federal and military partners."

Earlier in the day, South Korea's military said North Korea had fired several short-range projectiles from its Kangwon province that landed in the sea off its eastern coast.

Saturday's launch was the first the North has conducted since July 28, when it test-fired a missile that could have been designed to travel 10,000 km (6,200 miles) to be capable of targeting parts of the US soil, Presstv reported.

On Wednesday, North Korea’s leader Kim Jong-un ordered the production of more rocket warheads and engines, shortly after the United States suggested that its threats of military action and sanctions were having an impact on Pyongyang’s behavior.