TEHRAN, August 29 -The German and French leaders say the ceasefire, which recently took effect in eastern Ukraine, has failed to stop the violence there, calling on Russia and Ukraine to help protect the truce. 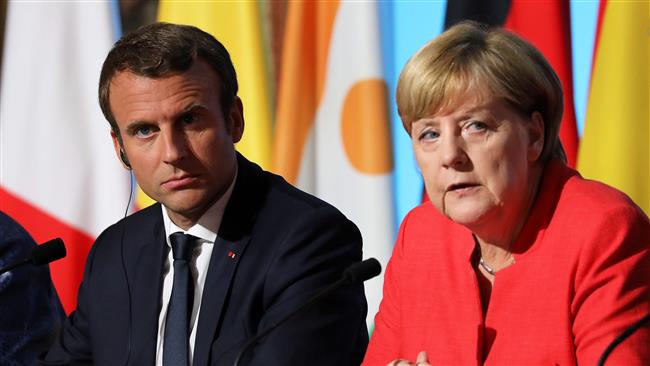 TEHRAN, Young Journalists Club (YJC) - In a joint statement on Monday, German Chancellor Angela Merkel and French President Emmanuel Macron complained the ceasefire, which came into force on Friday, “has not been fully implemented by the very same parties which signed it.”

Macron and Merkel said “the security situation in the East of Ukraine has not significantly improved” since they held a four-way telephone call with Russian President Vladimir Putin and his Ukrainian counterpart, Petro Poroshenko, on August 22.

They said there are “still a large number of violations,” including the use of heavy weapons, in the conflict zones in eastern Ukraine, which has been the scene of deadly clashes between Kiev’s army and pro-Moscow forces since 2014.

The two leaders called on all parties to provide observers from the Organization for Security and Co-operation in Europe (OSCE) with safe and unimpeded access to areas within the battle zones.

The OSCE is tasked with monitoring the situation in Ukraine’s eastern areas, called Donbass.

The statement further urged Putin and Poroshenko “to fully respect their commitments, to support the ceasefire in a public and clear manner, and to ensure that appropriate instructions have been sent to the military and local forces.”

Germany, France, Russia and Ukraine have created a diplomatic group, known as the Normandy format, tasked with resolving the crisis in Donbass eastern Ukraine.

Last week, pro-Russia forces agreed to a ceasefire Kiev’s military at meeting of the Contact Group, including the representatives of Ukraine, Russia and the OSCE. However, shortly after the ceasefire took effect, the two sides began exchanging accusations of breaches.

In 2014 and 2015, Russia, Germany and France brokered two ceasefire deals, known as Minsk I and Minsk II, between Ukraine’s warring parties, but the accords have failed to end the clashes, which have killed over 10,000 people there.

Kiev is a close ally to both the European Union and the United States. They accuse Russia of supporting the anti-Kiev forces operating in Ukraine’s mainly Russian-speaking regions. Moscow denies involvement in the conflict.

Ties between Russia and the West hit a new low after the Crimea Peninsula decided to separate from Ukraine and rejoin the Russian Federation in a popular referendum in 2014, months after the outbreak of the conflict in Donbass.