Tehran, YJC. Candidate believes that if it were not for the power enjoyed by the Islamic Republic, the Six Powers would not have resorted to negotiations. 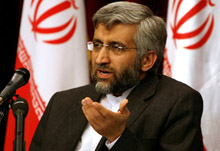 Speaking in an electoral gathering in Rasht, Guilan, Said Jalili said "Were it not for the power of the Islamic Republic, 6 global powers would not have set for negotiations with it.”
"This very power has created schism between these powers,” he asserted.
Jalili was the Secretary of the National Security Council and head of Iran’s nuclear negotiation team before signing up for presidential candidacy.
Five permanent members of the UN Security Council plus Germany are the members of the 5+1 group also known as the Six Powers.
Share to
Related News
Candidates must include foreign policy in their economic programs
Tags
jalili ، presidentials ، nuclear
Your Comment