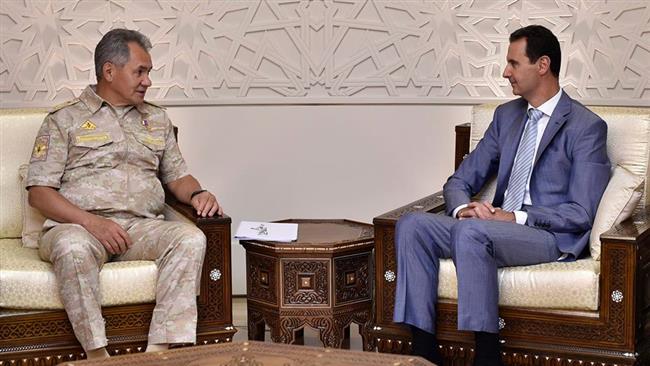 TEHRAN, Young Journalists Club (YJC) - During the Tuesday meeting in Damascus, Shoigu submitted a letter from Russian President Vladimir Putin to Assad, “congratulating him on lifting the siege” imposed by Daesh on Dayr al-Zawr, the Syrian presidency said in a statement.

The two sides underlined their resolve to continue counter-terrorism efforts across Syria until terrorism is defeated completely, noting that the fate of the war in Syria will determine the future map of the region.

“During the meeting, the issues of military and military-technical cooperation were discussed in the context of the successful actions of the Syrian government troops with the support of the Russian Aerospace Forces” aimed at the complete destruction of Daesh, the Russian Foreign Ministry said in a statement.

Last week, Syrian government forces, backed up by Russia airstrikes, reached Dayr al-Zawr on the Euphrates River, breaking a three-year terrorist siege on the city and a nearby air base.

Syrian soldiers are now preparing for a fresh offensive to cleanse Day al-Zawr of Takfiri Daesh militants. Reports said Monday that huge military reinforcements, including equipment, vehicles and troops, had been deployed to the city ahead of the new army push.

According to the Russian chief of staff in Syria, the Syrian government has managed to liberate 85 percent of the country from the grip of terrorist groups.

In a bid to aid the Arab nation in its war against foreign-sponsored terrorism, Russia started a campaign in Syria in 2015 at the Damascus government’s request.

Russian warplanes, based in Hmeymim, have so far significantly aided government troops in ridding Syria of the widespread militancy.

Assad and Shoigu further pointed to the upcoming Syrian peace talks in the Kazakh capital Astana on Thursday and Friday, and discussed ways to strengthen deescalation zones in Syria in an attempt to pave the ground for a lasting ceasefire.

The Astana peace process began in January, a month after the Syrian army and its allied forces dealt a fatal blow against the Takfiri militants in Aleppo.

The process, which is being mediated by Russia, Iran and Turkey, is aimed at facilitating local ceasefires in Syria and setting up deescalation zones amid negotiations between the warring parties.

On Tuesday, Lebanese daily al-Akhbar cited Hezbollah Secretary General Seyyed Hassan Nasrallah as saying that the Syrian government has won the war in the country
“We have won in the war (in Syria)...and what remains are scattered battles,” said Nasrallah.

Over the past six years, Hezbollah has been assisting Syria’s government in the fight against terrorists in a bid to prevent a spillover of violence into Lebanon.

The group launched an operation last month to recapture areas from other terror groups in Lebanese regions near the Syrian border.

The Lebanese army launched a long-anticipated battle on August 18 to clear its border regions from Daesh. Hezbollah and the Syrian army also contributed to the battle on the other side of the border in Syria.

The fight ended when the terrorists were encircled in a small strip of land and accepted to locate bodies of nine abducted Lebanese soldier in return for the evacuation of members to a Daesh stronghold in eastern Syria.