NATO to decide on increased Afghan deployment in one month

TEHRAN, September 17 - Senior authorities in the NATO military alliance have announced that a decision on sending more troops to Afghanistan as requested by the United States will take at least one month to take shape. 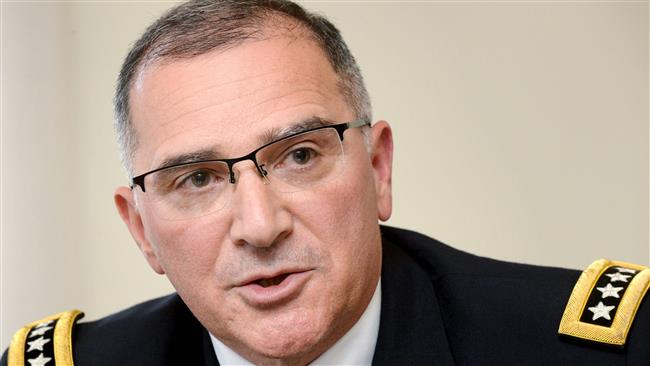 TEHRAN, Young Journalists Club (YJC) - NATO Supreme Allied Commander US General Curtis Scaparrotti said Sunday that the NATO Military Committee, which comprises defense chiefs from 29 member countries of the organization, would give a firm answer to a US request for increased troop contribution in Afghanistan in its next meeting in October.

Scaparrotti made the remarks after a meeting of the NATO committee in Tirana. The US military commander did not reveal the details of the discussions but hinted that  members had in general accepted US requests for increased troops on the ground in Afghanistan.

The commander said that the coalition was seeking more troops in Afghanistan to facilitate training and equipping of the Afghan military in the fight against militants.

“What we would like NATO to provide: TAA actually, that's train, advise and assist,”

Scaparrotti said, adding, "(There's an) effect on the morale of the Afghan troops when it's their own airforce support. So to the extent that we can get more advisers in there we can effect a faster development of their force, and it's better for everyone.”

General Petr Pavel, who heads NATO Military Committee, said in Tirana that all defense chiefs in the meeting recognized the need to fill current shortfalls in Afghanistan.

However, he said any response to the question of increased deployment would be made when the ministers consult their respective governments.

More than 16 years after the occupation of Afghanistan, the United States and allies in NATO still struggle to maintain security in the country. The coalition transferred security responsibilities to the Afghan forces in 2014 in a bid to end its long-standing mission there although some 13,000 NATO soldiers, most of them from the US, are still stationed in Afghanistan.

That comes as the Taliban, the militant force that ruled the country before the 2001 invasion, is regaining territories in south and north while defectors of the group are helping Daesh Takfiri terrorists to launch its own attacks in Afghanistan. US President Donald Trump has allowed the deployment of another 4,000 US troops in Afghanistan while he has repeatedly urged other NATO members to contribute more.

US Defense Secretary Jim Mattis told NATO allies in June that it was a responsibility for the alliance to finish its job in Afghanistan or risk allowing the militancy to bloom.

“The bottom line is that NATO has made a commitment to Afghanistan for freedom from fear and terror, and freedom from terror demands that you can't let this be undone,” he said at the time.