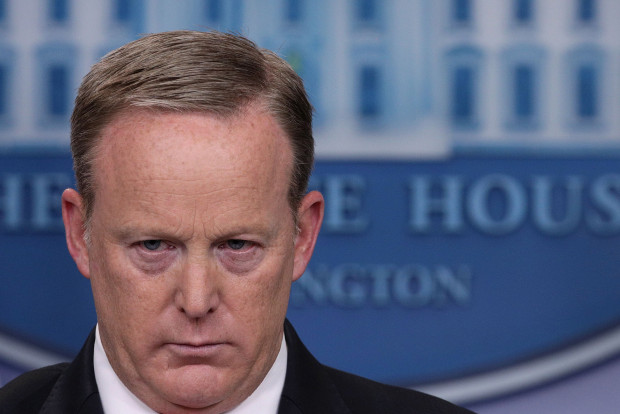 On Sunday, Spicer had a surprise appearance during host the Emmy Award ceremony, in which he took an indirect swipe at the president.

“This will be the largest audience to witness an Emmys, period, both in person and around the world,” Spicer said at the 69th Emmy Awards.

He was referencing his January press conference, in which he argued with reporters about the number of those attending Trump’s inauguration.

A person familiar with the planning of the Emmy program said on Monday that Colbert and his staff regarded Spicer’s appearance as both a joke at the expense of Trump, and also a way to poke fun at the event's host, Stephen Colbert.

After the surprise appearance, Spicer said he had not given the president or senior White House staff a heads up about his skit, which had been in the works for several days.

Spicer’s Emmy skit came after he revealed on a late-night talk show last week that it was his job to say whatever Trump told him to say.

“That's what you sign up to do,” said the former White House press secretary.

Revisiting his renowned briefing-room debut — an outburst against the media in which he falsely claimed that Trump's Inauguration Day crowd was the largest in history — Spicer basically admitted that he was willing to lie for Trump.

“Look, your job as press secretary is to represent the president's voice,” Spicer said, “and to make sure that you are articulating what he believes, [what] his vision is on policy, on issues and on other areas that he wants to articulate. Whether or not you agree or not isn't your job.”

Spicer resigned in July, barely six months after Trump gave him the post.