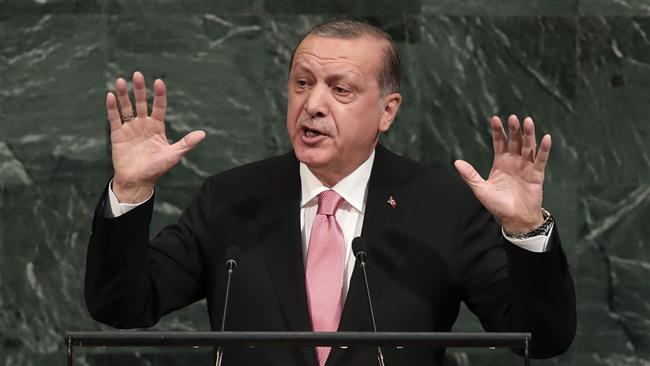 TEHRAN, Young Journalists Club (YJC) - Speaking to reporters outside his hotel in New York, where he is attending the United Nations General Assembly (UNGA) meeting, on Tuesday, Erdogan said his cabinet was due to discuss possible sanctions on the Iraqi Kurdistan when it convenes on Friday, state news agency Anadolu reported.

“As the national security council, we will advise the government on our decision. With it, the cabinet will meet and discuss this. It will both evaluate this and put forth their own stance on what kind of sanctions we can impose, or if we will, but these will not be ordinary,” the Turkish president said.

“We will announce our final thoughts on the issue with the cabinet meeting and national security council decision,” Erdogan said. “I think it would be better if they saw this.”

Addressing world leaders at the UNGA on Tuesday, Erdogan cautioned that the upcoming referendum in northern Iraq could lead to new conflicts in the Middle East, without elaborating.

Echoing Erdogan, Turkish Defense Minister Nurettin Canikli reiterated Ankara’s opposition to the planned Kurdish vote during a Tuesday speech in the capital Ankara, warning that the disintegration of Iraq could lead to fresh conflicts.

Canikli described the upcoming referendum as a major risk for Turkey and underlined Turkey’s determination to take “every step” to thwart any similar measure in its southeast Kurdish areas.

The Kurdish independence vote is also opposed by Iraq’s national government and Iran, as well as other countries.

Turkey enjoys strong trade ties with Iraq’s Kurdish Regional Government, which pumps hundreds of thousands of barrels of oil per day through Turkey and has approved plans for Russian oil giant Rosneft to invest in pipelines to export gas to Turkey as well as Europe.

But Ankara strongly opposes independence for the region.

Turkey even started drills across its southern border on Tuesday.

The Iraqi Kurds plan to hold a referendum on September 25 in three provinces that make up their region, as well as in disputed areas that are controlled by Kurdish forces but are claimed by Baghdad, including the oil-rich Kirkuk Province.

Baghdad has censured the upcoming vote as unconstitutional, urging the Kurdish leadership to drop the plan.

On Monday, Iraq’s top court temporarily suspended the Kurdish independence referendum, saying it “issued a national order to suspend the referendum procedures... until the resolution of the cases regarding the constitutionality of said decision.”