US airlifts Daesh terrorists to use them elsewhere: Syrian foreign minister 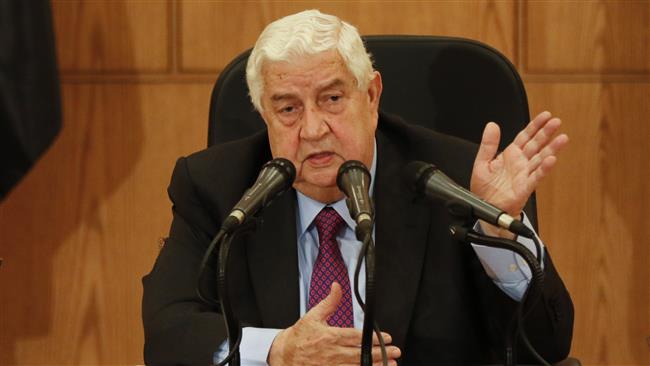 TEHRAN, Young Journalists Club (YJC) - “We have information and eyewitnesses on transporting ISIS (Daesh) terrorists on board American aircraft, and maybe the US wants to use ISIS terrorists in other areas,” Syrian foreign minister said in a Monday interview with Russia Today.

Muallem noted that the US military presence in Syria was “illegitimate and it came without permission of the Syrian government,” adding, “We knock all doors, and when diplomacy fails, we consider other solutions.”

He pointed to the Russian military presence in Syria to assist Damascus in its fight against terrorism and said, “We must differentiate between the legitimate Russian presence in Syria and the US presence, which is an aggression on the Syrian sovereignty.”

The US has been conducting airstrikes against what it says are Daesh targets inside Syria since September 2014 without any authorization from the Damascus government or a United Nations mandate.

The US and its allies have repeatedly been accused of targeting and killing civilians and drawn criticism over their failure to destroy Daesh, which they claim to be fighting.

On multiple occasions, Moscow has complained about what it says are friendly ties among US-backed militants, US special forces and Daesh terrorists in the region with the goal of slowing the advance of the Syrian army.

In response to a question about the Kurdish independence referendum in Iraq, Muallem expressed opposition to the idea of disintegration of Iraq, saying, “This issue is categorically rejected by us, and we are with the unity of Iraq.”

The Syrian foreign minister, however, expressed Damascus’ preparedness to hold dialogue on the prospect of semi-autonomy for the Syrian Kurds, noting, “The Syrian Kurds want a type of self-management within the borders of the Syrian Arab Republic, and this issue is negotiable and can be discussed, and when we eradicate ISIS (Daesh),

we can sit with them and agree on the shape of the future.”

On Monday, Iraq's semi-autonomous Kurdistan Region held an independence referendum in the face of strong objections from the central government in Baghdad and in defiance of urgent calls from the international community to scrap the vote.

Meanwhile, the Kurdish fighters belonging to the US-backed Syrian Kurdish People's Protection Units (YPG) are currently engaged in a fierce battle against Daesh Takfiri terrorists in Raqqah, the terror group’s de facto capital in the Arab country, in a bid to dislodge them from the embattled city, which was overrun by Takfiri elements in March 2013.

The Syrian Kurdish fighters currently control two cantons in Syria's northeast as well as the Afrin region to the west.

Turkey is deeply concerned that the YPG will permanently hold parts of land in northern Syria after finishing with Daesh and establish a Kurdish state close to Turkey’s Kurdish dominated areas.

The Syrian foreign minister also lauded the country’s latest military achievements against terrorists, including breaking the siege on city of Dayr al-Zawr and liberating Palmyra and al-Sikhnieh cities, as “significant” victories which indicate that “the main battles in Syria have almost reached the end and consequently, we are writing the final chapter of the crisis.”

Touching on reconstruction process in Syria, Muallem noted that only “the states, which have not conspired against Syria,” will be allowed to participate in the process.

He noted that if European countries sought to take part in Syria's reconstruction process, they must lift the unilateral restrictive measures imposed on Damascus.