TEHRAN, September 27 - U.S. President Donald Trump will call on Wednesday for slashing tax rates on businesses and the wealthy as part of a new tax plan that is likely to offer few details about how to pay for the cuts without expanding the federal deficit. 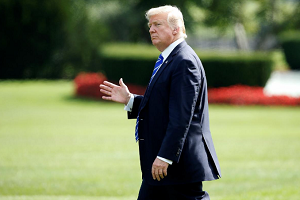 TEHRAN, Young Journalists Club (YJC) -Hammered out over months of talks among Trump aides and top Republicans in Congress, the plan to be unveiled at an event in Indianapolis was expected to propose a 20 percent corporate income tax rate, a new 25 percent tax rate for pass-through businesses such as partnerships, and a reduced 35 percent top income tax rate for individual Americans.

While it would lower the top individual rate from 39.6 percent, the plan was also expected to double the standard deduction, a set amount of income exempt from taxation, for all taxpayers.

“You have to look at the plan in its entirety. It doubles the standard deduction, so in the end, even the lowest rates get a tax cut,” said Jim Renacci, a Republican on the tax-writing House of Representatives Ways and Means Committee.

Republicans will say that the tax cuts, widely leaked to the media by a variety of sources in recent days, would be offset by new revenues raised from eliminating tax loopholes, although few if any of those are expected to be named in the plan.

Republicans are also expected to predict that the Trump tax cuts, if approved by Congress, would drive more robust U.S. economic growth, predictions that critics are sure to question.

At a time of slow but steady U.S. economic expansion, the Trump tax-cut package has some support in Congress, even among Republican fiscal hawks who only a short time ago routinely opposed deficit-financed fiscal proposals.

Trump and his Republican allies made completing tax reform in 2017 a top promise of the 2016 election campaign and are under mounting pressure to finish the job since the collapse of the latest Republican effort to overturn the Obamacare healthcare law.

Trump was expected to push lawmakers hard to quickly approve his tax package, despite critics who will say it falls short of the “tax reform” he promised on the campaign trail.

The plan will be the latest in a series of Republican documents outlining tax policy goals, but failing to tackle the tough questions that have defied past administrations’ efforts to fix the tax code. It has not been reformed since 1986.

The Republican president was expected to try to sell his proposals as beneficial to U.S. workers by saying they would drive economic growth, create jobs and raise wages.

Corporations now pay a statutory 35 percent income tax rate. That is high by global standards and corporations have been seeking a tax cut for years, even though many of them pay much less than the headline rate due to loopholes and tax breaks.

Profits of small, pass-through businesses that are passed directly to the owners are now taxed at the individual income tax rates, often at the top level of 39.6 percent.

Analysts have warned that huge tax cuts would balloon the federal deficit and debt if the economic growth projected by Republicans fails to materialize amid rising interest rates.

An early analysis of the Trump plan by the nonpartisan Tax Foundation think tank estimated it would reduce federal revenues by roughly $5 trillion over a decade, excluding offsets.

On Tuesday, Trump told Republicans and Democrats from the tax-writing House Ways and Means Committee that he wanted tax reform to be bipartisan.

The plan to be unveiled was developed by a small team of senior Republicans behind closed doors with no input from Democrats. It was not clear how far Republicans in Congress would go to accommodate Democratic demands for revenue neutrality and no tax cuts for the wealthy.

“Trump asked for Democrats to jump on the caboose after the tax train has already left the station. I saw no Democrat ready to jump on board,” Democratic Representative Lloyd Doggett said after the meeting.