'Sheikh of snipers' killed in battle to retake Hawijah

TEHRAN, October 1-Iraq’s Hashd al-Sha’abi says the group has lost a valued sharpshooter during the battle to retake the northern town of al-Hawijah from the Takfiri terror group of Daesh. 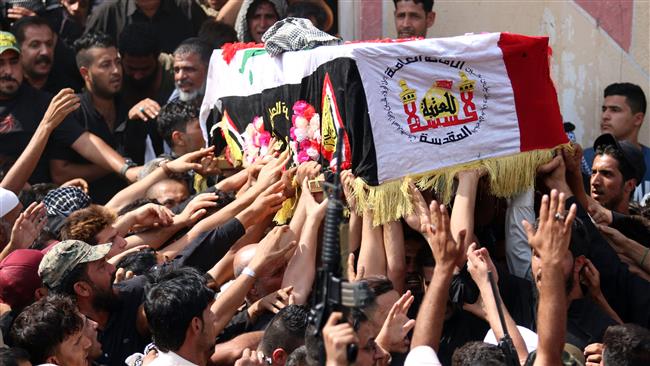 TEHRAN, Young Journalists Club (YJC) - Abu Tahsin al-Salhi, known to his comrades as "the sheikh of snipers" and "hawk eye", was killed on Friday as he advanced on Hawijah in northwest Iraq, Hashd al-Sha'abi spokesman Ahmad al-Assadi said.

The 63-year-old warrior had reportedly taken part in conflicts dating back to the 1973 Arab-Israeli war and said to have gunned down at least 320 Daesh terrorists, Iraqi reports said.

A funeral ceremony was held in his honor in the southern port city of Basra and Hashd al-Sha'abi released a video of the Steyr rifle-brandishing fighter in which he gave a rundown of his career as a sniper.
"Today, I gunned down two of them (Daesh terrorists). That's ridiculous -- the minimum for me is four," he says in the footage. In anti-Daesh battles in 2015, "I killed 173 of them, and now I'm at 320," he adds.
Daesh, which regards people not subscribing to its extremist ideology as “apostates” and subject to having their blood shed, invaded Iraq and neighboring Syria in 2014, overrunning vast swathes of territories in both countries.

The onslaught prompted Iraqis to volunteer for the front lines as the Takfiri group closed in on the capital, Baghdad. Hashd al-Sha’abi was among the first volunteer forces which joined the army to push back the terrorists.

The joint forces retook Ramadi, the capital of the sprawling western province of Anbar, in December 2015, in one of the most decisive victories against the terrorists.

Daesh has, ever since, been losing district after district in the face of advances by the Iraqi army and allied forces. Most notably, the terror group lost the northern city of Mosul, its last urban Iraqi stronghold, in July.

Iraqi armed forces are currently in the second phase of a the military operation to liberate al-Hawijah, one of the last remaining bastions of the Takfiri outfit. The first phase started on September 21, featuring operations aimed at freeing a Daesh enclave surrounding the town.