TEHRAN, October 1- A senior Russian official has dismissed a recent US claim that Moscow is trying to “shield” Iran from inspections by the International Atomic Energy Agency (IAEA), which Washington has been pushing to widen to Iran’s military sites. 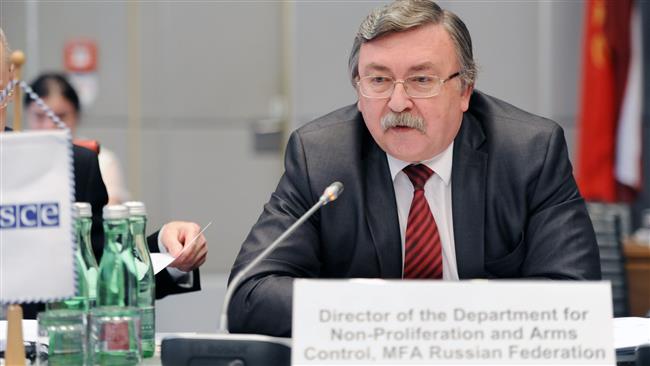 TEHRAN, Young Journalists Club (YJC) - Back in August, US Ambassador to the United Nations Nikki Haley attempted to convince the IAEA to request access to Iranian military sites, in what was generally viewed as an attempt to undermine a multilateral nuclear deal with Iran, known as the Joint Comprehensive Plan of Action (JCPOA).

That push failed when the IAEA said Iran was in full compliance with the deal and the agency had no reason to request access to Iranian military sites.

Then, the US began invoking Section T of an annex to the JCPOA to justify a push for access to Iranian military sites. Section T bans any development activity on nuclear weapons technology and restricts dual-use items that could be used to research warhead design but gives no jurisdiction to the IAEA on the matter.

Russia, which is a party to the deal, has thus been referring to the text of Section T to remind the US that the IAEA has no authority for inspections under that particular provision.

On Thursday, Haley, the US ambassador, accused Moscow of trying to “shield” Iran from inspections. She did not refer to Russia by name, however.

“It appears that some countries are attempting to shield Iran from even more inspections. Without inspections, the Iran deal is an empty promise,” said Haley, who has been a loud advocate of US President Donald Trump’s tough line on the JCPOA.
Mikhail Ulyanov, the head of the Russian Foreign Ministry’s Non-Proliferation and Weapons Control Department, responded on Friday by saying that Washington’s accusation against Moscow was short-sighted.

The IAEA has no reason to request access to military sites in Iran or any other country, he said, according to IRNA.

Ulyanov also said that Haley’s Thursday comments proved that the US was attempting to impose its opinion on the IAEA as well as the other signatories to the nuclear accord.
The IAEA, he said, is permitted to request access to Iran’s non-nuclear sites, but it has to provide reasons for such requests.

The Trump administration has been opposed to the Iran deal, which was negotiated by the former US administration. Trump himself has verbally attacked the deal numerous times and is reportedly planning to refuse to certify Iranian compliance at a mid-October deadline under an American law.

But the IAEA is the official institution tasked with certifying Iranian compliance, and it has repeatedly confirmed that Iran is adhering to its obligations under the deal.

All other signatories, including European countries, have stressed that the deal should be sustained and have cautioned against a potential US withdrawal.

Iranian Foreign Minister Mohammad Javad Zarif said on Friday that Europe and Asian powers had to refrain from going along with the US if Washington decided to scrap the JCPOA and re-impose nuclear-related sanctions on Iran.

On Tuesday, Ulyanov, the Russian Foreign Ministry official, had expressed bewilderment at the US posture toward the deal.

“There are no nuclear weapons in Iran. Nor are there any chemical or bacteriological ones. No such charges have ever been addressed to Iran. So what’s the problem?” he said.

The JCPOA was reached between Iran and the P5+1 group of countries — the US, Russia, China, France, Britain, and Germany — in July 2015 and took effect in January 2016, a year before Trump took office.

Share to
Related News
'Trump quietly asks Congress to save Iran deal'
Zarif: Renegotiation of the Nuclear deal a ‘myth’
Tags
Iran ، Russia ، US
Your Comment