TEHRAN, October 2 - The US Navy says one of its aircraft with two aviators on board has crashed during a training flight in East Tennessee. 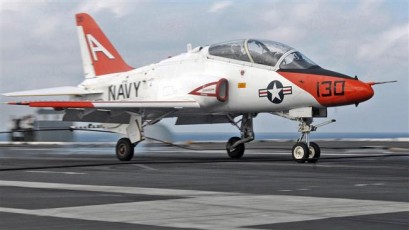 TEHRAN, Young Journalists Club (YJC) -he incident took place Sunday afternoon, when the T-45C Goshawk jet on a training flight from Meridian, Missouri, went down in the Cherokee National Forest near Tellico Plains.

The Navy said in a press release that the jet was carrying two pilots, an instructor and a student, but their status was unknown. Federal authorities said they assumed the crash was fatal.

Investigators told local media that civilians were being kept three miles away from the crash site due to reports the plane had explosives on board as well.

The Chief of Naval Air Training was investigating the site of the crash while Monroe County authorities, Tennessee Wildlife Resources Agency and the US Forestry Division were also helping with the rescue operation.

The T-45 is used to train all US Navy student pilots in jet aircraft.

The Navy grounded all its 197 training jets in April, following reports that over 100 pilots were refusing to fly the 30-year-old T-45 aircraft.

According to a Capitol Hill testimony senior naval aviators, there has been a four-fold increase in psychological episodes among Goshawk pilots over the past year, an issue that has been partly blamed on the aircraft’s malfunctioning oxygen systems.

Last year, at least 10 such incidents were reported on T-45s.

Vice Admiral Mike Shoemaker, commander of the US naval air forces, said back then that the technical issue had become the naval aviation’s “number one safety priority.”
The walkout drew reactions from ranking members of the congressional armed services committees.

“There is no question that there are problems that are being covered up,” House Armed Services Committee Chairman Mac Thornberry said. “I am very concerned about the issue. It’s been getting worse over time and if you look at the statistics, the older airplanes are having bigger problems than newer airplanes.”