TEHRAN, October 4 - Israeli troops have made some 200 Bedouin Palestinians homeless after demolishing their village in the Negev region. 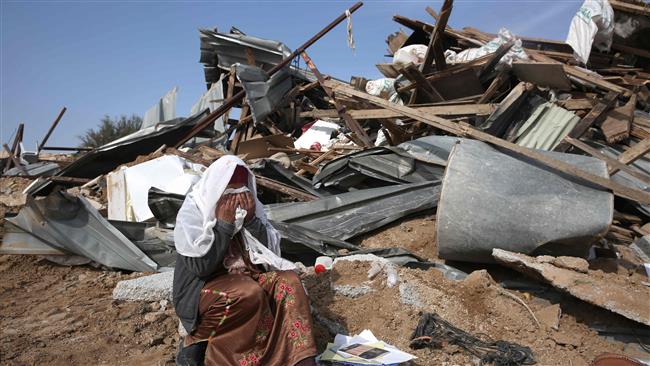 TEHRAN, Young Journalists Club (YJC) - According to residents of the Araqib village on Tuesday, Israeli troops raided the village with bulldozers and destroyed every single building.

The village, with about 220 residents, was initially demolished on July 27, 2010, but has since then been rebuilt multiple times by its residents and activists.

"We're now living in makeshift homes, thanks to the state's racist and criminal policies," he added.

A recent report by the United Nations Office for the Coordination of Humanitarian Affairs (OCHA) showed that Israeli authorities have demolished or seized over 1,080 Palestinian-owned structures since the start of the last year up until December 28. The demolitions have left some 1,593 Palestinians homeless and affected the lives of another 7,101, according to the report released on December 29, 2016.

The UN also notes that the “vast majority” of the Palestinian structures are destroyed or seized because the Israeli policies made it virtually impossible for Palestinians to obtain building permits.

Israeli demolitions of Palestinian homes and structures have raised alarm among diplomats and human rights groups over what they regard as the Tel Aviv regime’s continued violation of international law.