TEHRAN, October 4 - A so-called monitoring group says Syrian army soldiers, supported by allied fighters from popular defense groups, have flushed Daesh Takfiri militants out of their last positions in the western-central province of Hama as they continue to make territorial gains across the war-ravaged Arab country. 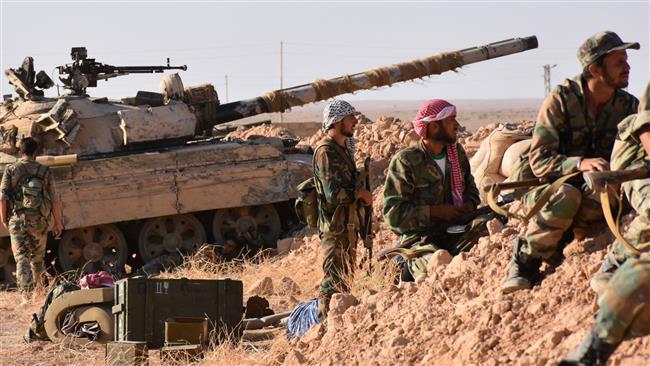 TEHRAN, Young Journalists Club (YJC) - The Syrian Observatory for Human Rights said on Wednesday that Daesh terrorists were no longer present anywhere in the province for the first time in three years.

The observatory's director, Rami Abdel Rahman, said government forces had “managed to take control of all the last remaining villages in the hands of Daesh in Hama province after more than a month of fierce clashes between the two sides.”

The Britain-based monitoring group further noted that more than 400 Daesh militants and nearly 190 Syrian soldiers and pro-government fighters had been killed in the fighting.

The pro-government and Arabic-language al-Watan newspaper also reported that “the army had taken complete control of Hama province.”

“Daesh is no longer present in Hama province,” it added.

Meanwhile, scores of Daesh terrorists have been killed and injured as Syrian air force fighter jets pounded their positions and vehicle convoys on the outskirts of Salamiyah city, located 33 kilometers southeast of Hama.

A military source, speaking on condition of anonymity, told Syria’s official news agency SANA that the airstrikes destroyed Daesh vehicles in and near the villages of Jib Aeid and al-Maksar al-Janoubi.

By early 2015, the Takfiri terrorists were in control of some parts of the city of Dayr al-Zawr and besieged the remaining parts, which were under government control. It is estimated that 100,000 people remain in the government-held parts of the city.

Separately, the Syrian army and its allied forces managed to seize full control over several more positions and outposts near the country's border with Jordan.

They retook control of nine border areas from Point 177 to Point 185, which were regarded as the main defense lines of foreign-sponsored terrorists in southern Syria.