Americans worry about Trump and US future: Poll

TEHRAN, October 6 -Americans overwhelmingly disapprove of US President Donald Trump and believe he is leading the country in the wrong direction, according to a new poll. 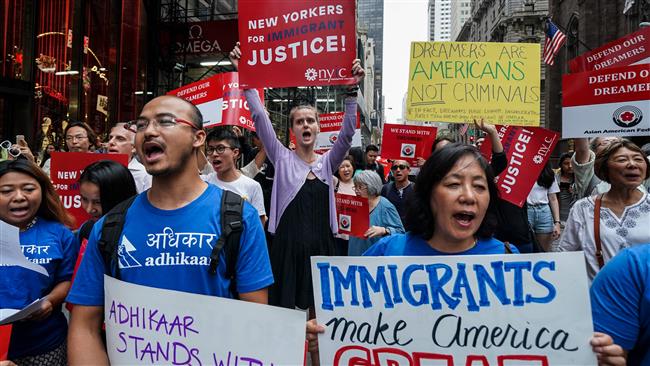 TEHRAN, Young Journalists Club (YJC) - The USA TODAY/Suffolk University poll released Thursday also found that most Americans disagree with Trump on just about everything from his military threats against North Korea to his combative stance toward US football players who won't stand for the national anthem.

Nearly two-thirds, or 64 percent of Americans, say the US is on the wrong track, up 21 percentage points since the beginning of the year and the highest of Trump’s tenure.

Trump also gets low marks for his clash with National Football League (NFL) players who protest during the country's national anthem. Two-thirds of those surveyed say the president's call for NFL owners to fire the protesting players and for fans to boycott their games is inappropriate.
When it comes to North Korea, 56-34 percent disapprove of the president's handling of Pyongyang’s nuclear and missile programs.

The survey found that 61 percent of Americans say the United States should pursue diplomacy to try to curtail Pyongyang’s nuclear program, not undertake military action.

During a visit to Beijing on Saturday, embattled US Secretary of State Rex Tillerson said Washington had "made it clear that we hope to resolve this through talks," saying his immediate goal was "to calm things down" with North Korea.

That brought an extraordinary public rebuke from Trump. "I told Rex Tillerson, our wonderful secretary of State, that he is wasting his time trying to negotiate with Little Rocket Man," Trump tweeted on Sunday, a reference to North Korean leader Kim Jong-un. "Save your energy Rex, we'll do what has to be done!"

Americans also hold negative views about almost everybody in US politics, not to mention the news media.

The US news media is viewed unfavorably by 54-31 percent, worse than the already dismal 50-37 percent unfavorable rating in the first poll of the year.