Indonesian President and his entourage forced to walk during traffic jam 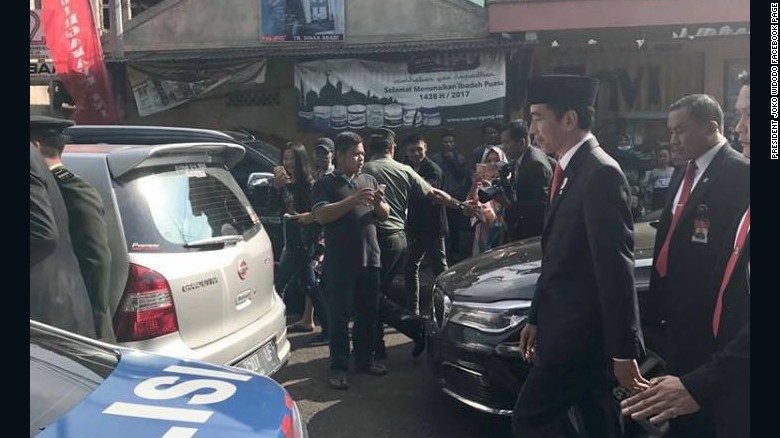 In an almost unimaginable scenario for most world leaders -- accustomed to traveling on wide open streets secured by police —Widodo and his entourage were forced to walk 3 kilometers (1.9 miles) in Cilegon on Thursday to attend a military event.
Widodo was scheduled to participate in a parade marking the 72nd anniversary of the country's defense forces in Banten province -- about a two-and-a-half-hour drive from Jakarta.
"I asked how far we still had to go. 'Three kilometers, sir,' the driver answered. Well, I then got off the car. I had better walk," Widodo told reporters, according to the state-run Antara News. It said he opted to walk after waiting for 30 minutes in his car.
Following the President's cue, several high-level officials, including the defense minister and the chief of staff, took to the pavement.
Indonesia is notorious for heavily-congested streets, especially in the capital of Jakarta, where short drives can take hours.
The traffic was too congested even for motorcycles, which are popular in the city.
"I might have taken a motorcycle if only it could pass, and I would not have become this tired," Widodo told state media.
Luckily, the President was in good spirits and did not seem to mind the afternoon stroll.
"It is only 3 kilometers. I am used to walking that far. It is all right, although it made me sweat because I wore a suit," he said.
Source: CNN
Share to
Related News
Indonesia police comb site of deadly fireworks factory explosions
Snakes on a plate: Locals feast on python after horror plantation attack (PHOTO)
1,000s hold anti-communism protest in Indonesia
Rumbling volcano forces thousands more to flee Bali
Menacing Bali volcano throws tourists' plans into jeopardy
Tags
Indonesia ، Traffic ، Joko Widowo ، Military Parade
Your Comment