TEHRAN, October 8 - US President Donald Trump has rejected diplomatic means for dealing with North Korea’s escalating missile and nuclear weapon testing, suggesting that a military response is the only option against Pyongyang. 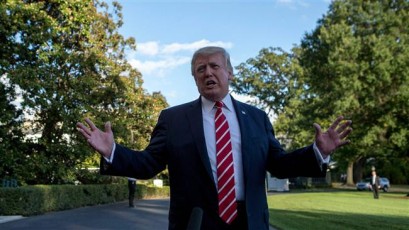 TEHRAN, Young Journalists Club (YJC) -US President Donald Trump has rejected diplomatic means for dealing with North Korea’s escalating missile and nuclear weapon testing, suggesting that a military response is the only option against Pyongyang.

“Sorry, but only one thing will work,” Trump wrote in a Saturday tweet after insisting that US authorities have negotiated and signed agreements with Pyongyang in the past quarter of a century to no avail.

"Presidents and their administrations have been talking to North Korea for 25 years, agreements made and massive amounts of money paid hasn't worked, agreements violated before the ink was dry, makings fools of US negotiators," Trump wrote in an earlier tweet.

Trump's latest tweet outburst regarding the North Korea issue raises fears of potential US military action against the nuclear-armed nation, echoing his last Sunday's remarks when he insisted that Secretary of State Rex Tillerson was “wasting his time” attempting to negotiate with Pyongyang.

The hawkish president further stated that his administration would "do what has to be done" in response to actions by North Korean leader Kim Jong-un, whom he has mocked as "Little Rocket Man."

Ri further reacted to Trump’s threat by referring to him as a barking dog, saying, “If he was thinking he could scare us with the sound of a dog barking, that’s really a dog dream.”

Tensions between Washington and Pyongyang have intensified in recent months, while relations between Trump and Tillerson have also gained fresh interest recently amid contrasting remarks on the US approach to North Korea.

Tillerson held a hastily-scheduled press conference on Wednesday to push back on reports that he considered resigning over the summer. Trump later expressed confidence in his top diplomat.

The development came as Trump criticized Tillerson on Saturday, telling reporters that he sometimes wished his secretary of state would “be a little tougher.”

Trump’s remarks came after reports that he and Tillerson have a tense relationship. NBC News reported last week that Tillerson called Trump a “moron” and considered leaving the administration.