Saudi FM: US, EU anti-Russia sanctions to be lifted soon

TEHRAN, October 8 - Saudi Arabian Foreign Minister Adel al-Jubeir has said that anti-Russia US and EU sanctions may be lifted in the near future. 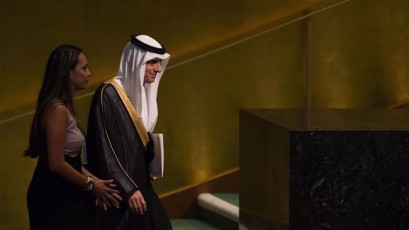 TEHRAN, Young Journalists Club (YJC) -Saudi Arabian Foreign Minister Adel al-Jubeir has said that anti-Russia US and EU sanctions may be lifted in the near future.

“We hope that an arrangement can be worked out where Russia and the international community can work out their differences so that the sanctions can be removed. And I expect that this will be soon,” said Jubeir in an interview with Russia TV on Saturday.

A host of sanctions have been imposed against Russia over 2014 annexation of Crimea from Ukraine.

The EU has blocked the import of products from Crimea and halted any European investment or real estate purchases and prevents cruise ships from stopping in Crimea.

Crimea declared independence from Ukraine on March 17, 2014 and formally applied to become part of Russia following a referendum, in which the majority of people voted to separate from Ukraine and reunite with Russia.

The EU, however, considers the development as an "illegal annexation” and has imposed a raft of economic sanctions on Russia.

Russia, however, has categorically denied the allegations that it is responsible for the Ukrainian conflict.

Jubeir went on to stress that Riyadh deems Moscow as a “friendly country” and that the kingdom is seeking greater cooperation in all fields with Moscow. He further went on to praise Russia’s role in the Middle East.

“We believe that a strong Saudi-Russian relationship can help to solve many of the challenges in the region,” he said, adding that Riyadh believes “that Russia’s role in the Middle East is a positive one.”

He also said that Russia could also play a role in achieving a so-called two-state solution in Palestine.

“We both want to see a peaceful resolution of a conflict in Syria, based on Geneva declarations and the UN Security Council resolutions,” he added.

Jubeir also noted that Riyadh’s relation with Russia does not contradict their partnership with the US.

The Saudi foreign minister’s remarks come during a visit by Saudi Arabia’s King Salman to Moscow, the first such visit by a monarch in the kingdom’s history.

Russia and Saudi Arabia are currently at loggerheads over the conflict in Syria. Moscow has backed Syria’s legitimate fight against terror and has even deployed boots on the ground. Riyadh, however, has openly backed groups that have used violence to topple the government of President Bashar al-Assad.