TEHRAN, October 8 - President Donald Trump said unless peace is established between Israel and Palestine, the US embassy will not be moved from Tel Aviv to Jerusalem al-Quds. 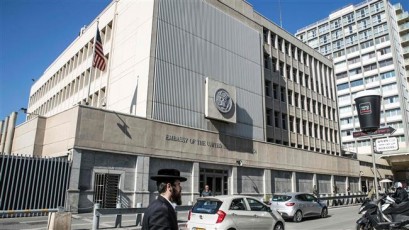 TEHRAN, Young Journalists Club (YJC) - “I want to give that a shot before I even think about moving the embassy to Jerusalem,” Trump told former Arkansas Governor Mike Huckabee on the TBN program “Huckabee.”

“If we can make peace between the Palestinians and Israel, I think it’ll lead to ultimately peace in the Middle East, which has to happen,” he said.

Asked about the time of a possible embassy move, the president said, “We’re going to make a decision in the not too distant future.”

During his 2016 campaign, Trump came up with the controversial proposal that caused a lot of discussions.

Palestinians oppose the move and have repeatedly warned Trump against such an action. Also, the Palestine Liberation Organization warned the US against the relocation of the embassy.

The organization emphasized the potential relocation would deliver a death blow to any prospects of the resolution of the Palestinian-Israeli conflict and fuel extremism in the region.

Washington has already suggested that it would no longer insist on the so-called two-state solution to the Israeli-Palestinian conflict, which envisages the establishment of an independent Palestinian state.

Since Trump’s inauguration in January, Tel Aviv has increasingly become emboldened in its expansionist plans for Jerusalem al-Quds.

Israel lays claim to the entirety of Jerusalem al-Quds as its capital while Palestinians want its eastern part as the capital of their future state.

The Israeli regime has attempted to change the demographic buildup of al-Quds over the past decades by constructing settlements, destroying historical sites and expelling the local Palestinian population.