TEHRAN, October 9 - The recent mass shooting that killed and injured hundreds of people at a music festival in Las Vegas, Nevada, further revealed the American society’s violent nature, says an analyst in Oakland. 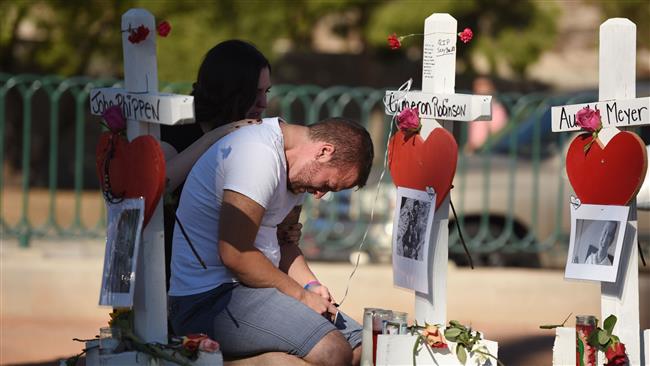 Paddock was “an all-American man, he was America, that is who we are,” Mason said.

“We are a violent, patriarchical, settler colonial society.”

Investigators and Paddock’s associates say they cannot fathom what drove the former accountant and real estate investor to slaughter.

Authorities, who have been desperately trying to track Paddock’s movements in the build-up to the massacre, say he had also monitored recent music festivals in Chicago and Boston.

In addition, law enforcement officials found “some explosives and several thousand rounds of ammo, along with some electronic devices” in the shooter’s property. But Paddock’s motives still remain a mystery.

Pointing to America’s long history of violence in forms of “genocide against the native population, land theft and slavery,” Mason said what the Vegas mass shooter did was no surprise.

“Paddock was only doing what he sees the US governments do on TV,” he said. “The US, when it has a conflict, dismisses just diplomacy and politics [and] begins immediately threatening nuclear war, torture, slaughter” and all the other things that “bullies” do.

Pointing to American Football and its glorification despite its violent nature, Mason said violence was “normalized” in US culture.

“We are five percent of the world population but we own half of the handguns in the entire planet,” he asid.

More than 100,000 people are shot each year in the US at a total cost of $45 billion, a cost that includes lost wages and hospital charges, according to a new study published last week by the journal Health Affairs.