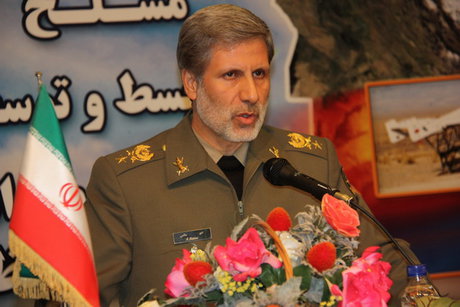 TEHRAN, Young Journalists Club (YJC) - He made the remarks as US President Donald Trump is expected to announce new measures against Iran, including the prospect of additional targeted sanctions and the designation of the IRGC as a terrorist organization.

“The IRGC, the Army and other units are standing against the US administration’s hostile and tension-creating policies and measures in a united way,” he said.

The Iranian minister continued Iranian nation, the trio judicial, legislature and executive branches and the armed force would foil and repress any attack on bases of the Islamic Republic, including the IRGC.

He said that the IRGC is a revolutionary organization belonging to all nations and has made brilliant sacrifices for security and calm in the region.

Hatami noted calling the IRGC a terrorist is a ‘terrorist measure’, adding any plot or move to weaken this anti-terrorist organization means helping expansion of terrorism and unrest in the region and the world.

He said that Zionist lobby in the US is behind these hawkish moves.

Share to
Related News
Iran’s Armed Forces vow to continue boosting defense power
Iran says to retaliate in case of any US action against IRGC
US provides logistic support to Daesh in Iraq, Syria: IRGC commander
US too petty to stand against IRGC
Russia opposes US plans to label Iran’s IRGC as terrorist group
Iran Armed Forces spokesman says time to teach new lessons to US
Tags
Iran ، US ، IRGC
Your Comment