Tehran, YJC. IRGC’s Khalij Fars can target with a precision of about 8.5 meters. 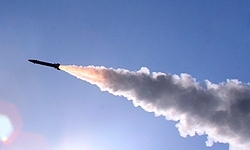 Brigadier General Amirali Hajizadeh says "When Khalij Fars hit the target in its second test with a precision under 30 meters we felt we had made a big achievement.”

"As we reported the event to the Master [Supreme Leader], he said ‘It is magnificent that you have managed to bring to precision to 30 meters. But I want you to increase it to less than 15-10 meters.’ After 6 months, our experts could improve the precision to 8.5 meters,” he added.

The IRGC Aerospace Commander also stated that with Khalij Fars operational, the countdown has been begun for ultraterritorial gunboats to leave the region.

The operational range of Khalij Fars is 300 km, it relies on hybrid navigation, and can carry 650 kg solid explosives.

A recent version of the missile is launched from triple launchers.