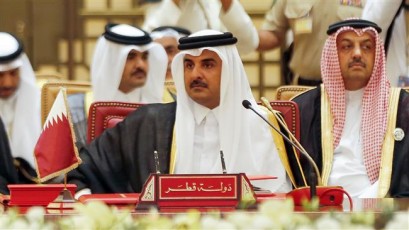 Abdullah bin Hamad al-Attiyah told the Spanish daily ABC earlier this week that the UAE hired a "Blackwater-linked" private security contractor to train the mercenaries, referring to the notorious American company that is now called Academi.

The training, he said, was aimed at invading Qatar to topple the Persian Gulf country’s emir and replace him with a ruler subservient to the Saudi-led bloc which has been boycotting Doha over the past months.

The UAE plan for the military action was prepared before the Qatar rift, but it was never carried out as US President Donald Trump did not give the green light to it, Attiyah added.

Back in June, Saudi Arabia, Egypt, Bahrain, and the UAE imposed a trade and diplomatic embargo on Qatar, accusing Doha of supporting terrorism, an allegation strongly denied by Doha.

They presented Qatar with a list of demands, among them downgrading ties with Iran, and gave it an ultimatum to comply with them or face consequences. Doha, however, refused to meet the demands and said that they were meant to force the country to surrender its sovereignty.

In September, two people close to Trump told Bloomberg that Saudi Arabia and the UAE considered use of force in the early stages of their dispute with Qatar before the US president warned them to back off.

Additionally last month, a leaked email sent by Emirati Ambassador to the US Yousef al-Otaiba to former US diplomat Elliott Abrams showed that Saudi Arabia had come close to "conquering" Qatar.

In the May 2017 email, Otaiba told Abrams that conquering Qatar would "solve everyone's problems and King Abdullah of Saudi came pretty close to doing something in Qatar a few months before he died in January 2015.

In 2011, The New York Times reported that dozens of Colombians posing as construction workers entered the UAE to become part of a secret mercenary army set up by Blackwater with over $500 million in financing from the monarchy.

Blackwater founder Erik Prince was hired by the crown prince of Abu Dhabi to put together an 800-member battalion of foreign troops for the UAE according to the report.