TEHRAN, October 15 - An extra-terrestrial hunter has found what he claims to be a dead alien buried in snow . 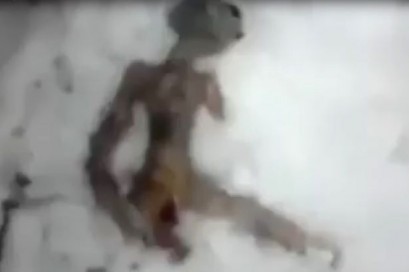 TEHRAN, Young Journalists Club (YJC) - An extra-terrestrial hunter has found what he claims to be a dead alien buried in snow .

The bizarre footage shows the figure with large black eyes and an open mouth, and appears to be badly disfigured.

The alien seems to be missing an arm and a leg and it's face had a blue tinge, while the rest of its body is a yellow and pink colour.

It first appeared on a Russian TV channel, with millions of viewers have been trying to work out the authenticity of the video.

It was reported that the video was shot in Irkutsk, Siberia.

But it was soon revealed by the Russian Interior Ministry that the clip was actually a hoax.

A Kremlin spokesman said: "We found the alien in one of the student's homes.

"It was lying under his bed and an examination of it revealed it had been made of bread crumbs which were covered in chicken skin."

It's believed the video was actually filmed years ago, but has recently resurfaced online after being posted on Reddit.

But some viewers weren't convinced by the official explanation, asking: "How are you gonna shape the body perfectly like that if it's fake?"