TEHRAN, October 17 -U.S. President Donald Trump said on Monday he would review a report that his nominee for drug czar championed a law that weakened the government’s ability to fight the nation’s opioid epidemic, and said he could consider jettisoning the pick. 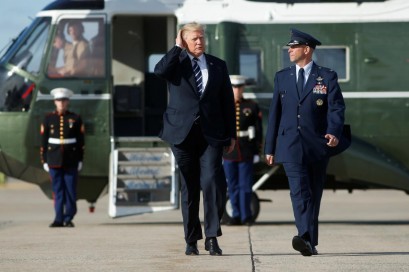 TEHRAN, Young Journalists Club (YJC) -U.S. President Donald Trump said on Monday he would review a report that his nominee for drug czar championed a law that weakened the government’s ability to fight the nation’s opioid epidemic, and said he could consider jettisoning the pick.

“We’re going to look into the report,” Trump told reporters at the White House.

Asked if the report had undercut his confidence in his nominee to head the Office of National Drug Control Policy, Representative Tom Marino, Trump said: ”I have not spoken to him, but I will speak to him, and I’ll make that determination.

“If I think it’s 1 percent negative to doing what we want to do, I will make a change, yes,” he added.

Marino’s office did not immediately return a request for comment.

The report by the Washington Post and CBS described how Marino introduced and helped push through industry-backed legislation that undercut the Drug Enforcement Administration’s ability to freeze suspicious shipments of pain pills from drug companies.

A number of Democrats called for Trump to abandon his nominee in the wake of the report.

“Congressman Marino no longer has my trust or that of the public that he will aggressively pursue the fight against opioid abuse,” Democratic Senator Joe Manchin said in a statement. Manchin’s state of West Virginia has been hit hard by the opioid crisis.

In his remarks to reporters, Trump suggested he would be open to changing the law that Marino, a fellow Republican, helped push through and said he would make good on an earlier promise to declare the opioid epidemic a national emergency.

“We are going to be doing that next week,” he said, calling the crisis a “massive problem.”

Opioids were involved in more than 33,000 deaths in the United States in 2015, the last year of publicly available data, according to the Centers for Disease Control and Prevention. Overdoses from the category of drugs nearly quadrupled between 1999 and 2015, the CDC said.