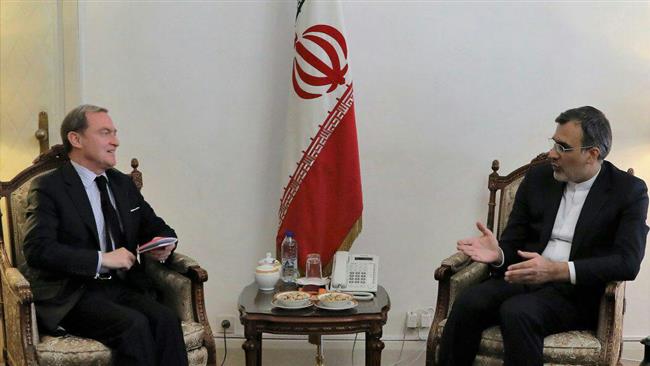 TEHRAN, Young Journalists Club (YJC) - Hossein Jaberi Ansari met with Franck Gellet in the Iranian capital, Tehran, on Tuesday, discussing the roots of the crisis in Syria and possible ways to defuse it.

He expressed Iran’s readiness for cooperation within the framework of these principles toward the restoration of peace and security in Syria.

Gellet, for his part, stressed the French government’s determination to help bring about a political resolution of the Syrian conflict.

He hoped that Paris and Tehran would, in cooperation with each other, be able to use their respective influence to encourage intra-Syrian negotiation and help the resolution of the situation.

Syria has been gripped by foreign-backed militancy since March 2011. Damascus says Western powers and their regional allies support militants fighting the government.

Since early this year, the talks, held in the Kazakh capital of Astana, have resulted in the designation of four de-escalation zones across the Arab country, which have resulted in reduced fighting.

Jaberi Ansari is Iran’s lead negotiator in the Astana talks.