TEHRAN, October 17 - A so-called monitoring group says at least 3,250 people dead, more than a third of them civilians, have lost their lives ever since militants from US-backed Syrian Democratic Forces (SDF) launched an operation to retake the northern Syrian city of Raqqah, which served as Daesh Takfiri terrorist group's de facto capital in the war-ravaged Arab country. 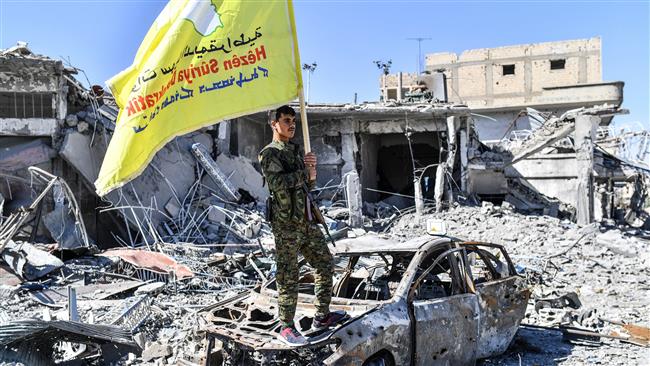 TEHRAN, Young Journalists Club (YJC) - The Syrian Observatory for Human Rights (SOHR) reported on Tuesday that at least 1,130 civilians were among those killed since the start of the operation in early June.

The Britain-based noted that hundreds more people are still missing and may have been buried alive in their homes as a result of shelling, bomb explosions as well as airstrikes conducted by the US-led coalition purportedly fighting the Daesh Takfiri terrorist group in Syria.

The report came as a senior commander for the SDF force said that the US-backed militants had fully recaptured Raqqah, located about 455 kilometers (283 miles) northeast of the capital Damascus.

Sello added that there are no longer clashes in the city.

A formal declaration will be made from the city once the clearing operations end. Raqqah is still full of landmines, but members of the Syrian Democratic Forces are now in control of the former "capital of terrorism," the top SDF commander pointed out.

Earlier on Tuesday, SDF forces captured Raqqah hospital, which had served both as a medical facility and a Daesh command center.

Musafa Bali, a spokesman for the SDF, said 22 Daesh militants were killed in the advance on the hospital.

On Monday, the Kurdish-led SDF captured Paradise Square, where Daesh terrorists used to perform killings and decapitations, forcing local residents to watch after summoning them with loudspeakers.

“The stadium is a huge structure with underground rooms and tunnels. There are also buildings around it” still under the control of Daesh extremists, Bali said.

On June 6, the SDF said it had launched an operation aimed at pushing Daesh out of Raqqah.

The city of Raqqah, which lies on the northern bank of the Euphrates River, was overrun by Daesh terrorists in March 2013, and was proclaimed the center for most of the Takfiris’ administrative and control tasks the following year.