TEHRAN, October 17 - The United States and Japan have agreed to pile the toughest possible diplomatic pressure on North Korea amid tensions about Pyongyang’s intensified nuclear and weapons program. 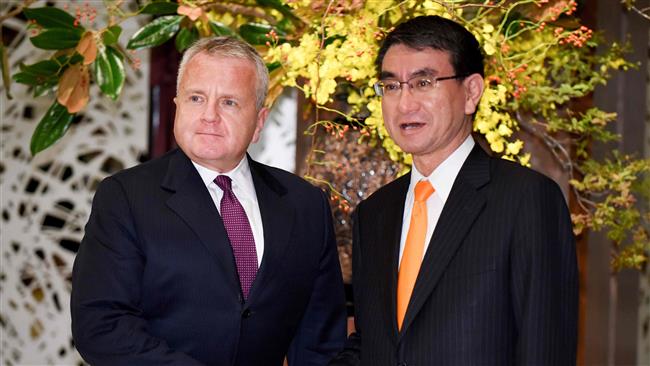 TEHRAN, Young Journalists Club (YJC) - In a Tuesday meeting in Tokyo between US Deputy Secretary of State John Sullivan and his Japanese counterpart Shinsuke Sugiyama, the two sides, however, again warned North Korea of a potential military action in case diplomacy fails.

The United States has led international efforts to impose some tough sanctions on North Korea after Pyongyang tested two intercontinental ballistic missiles (ICBM) in July and later carried out its most powerful nuclear test. Pyongyang also sent missiles above Japan in September, prompting massive fears in the island country.

However, a major obstacle to any de-escalation on the Korean Peninsula has been Washington’s belligerent threats against the North such as the one from US President Donald Trump, who said after the ICBM tests that he would unleash “fire and fury” on North Korea like the world has never seen.

The US has also sought to increase its sale of modern weapons to Japan while it continues to launch joint military drills with South Korea, a move which North Korea designates as a rehearsal for invasion.

Sullivan, the senior diplomat visiting Japan to promote US insistence on diplomacy over North Korea, again repeated threats of war against North Korea, saying Washington and allies should be prepared for failure of diplomacy.

“We must, however, with our allies in Japan and South Korea and elsewhere, be prepared for the worst should diplomacy fail,” Sullivan said, adding that Washington must be prepared to defend itself and its allies.

His counterpart, Sugiyama, who briefed journalists separately, said Japan was also supportive of Trump’s policy of keeping all options open. He said Tokyo was in favor of more cooperation among Japan, the US, and South Korea on one side and China and Russia, two countries close to North Korea, on the other.

Sugiyama and Sullivan are expected in South Korea on Wednesday for further talks on North Korea. Those talks would come as the US would hold another round of joint military drills with South Korea this week, which could further anger the North and lead to a new escalation.