TEHRAN, October 18 - Iraq's Kurdistan Regional Government (KRG) has decided to postpone the presidential and legislative elections in the northern semi-autonomous region amid spiraling tensions with the Baghdad government in the wake of last month’s Kurdish independence referendum and a dire ‘threat of civil war’ there. 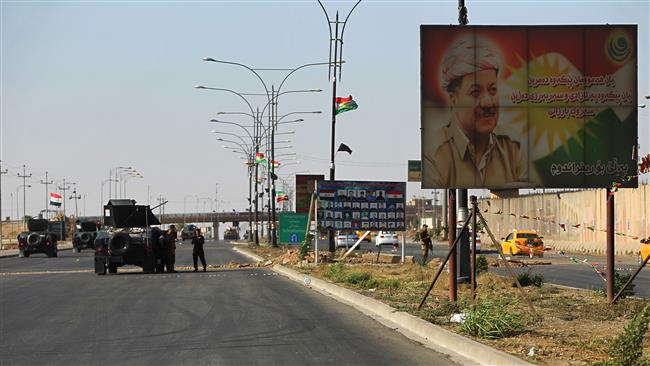 TEHRAN, Young Journalists Club (YJC) - The KRG’s Independent High Electoral Commission announced on Wednesday that it had “opted to suspend temporarily preparations for the November polls due to the current situation.”

Mohammad Tawfiq Rahim, the coordinator of diplomatic relations in the Movement for Change and a prominent rival of Kurdish President Massoud Barzani, was the only candidate registered to run, but the commission ruled he had missed the deadline.

Barzani has repeatedly said he will not stand for another term.

Meanwhile, a senior leader of the Patriotic Union of Kurdistan (PUK) has warned that the Kurdistan region may split, leading to a "civil war" that would prompt regional and international powers to intervene.

“There is a grave danger of the Kurdistan region splitting into two administrations. This is expected to cause civil war and regional and international interference,” Mala Bakhtiyar, the executive head of the PUK politburo office, warned in a statement.

The referendum on secession of the Kurdistan region was held on September 25 despite strong opposition from the central government in Baghdad, the international community, and Iraq's neighboring countries, especially Turkey and Iran.

“The KRG must first commit to Iraq's unity. The local authorities in the [Kurdistan] region… must accept the sovereign authority of the federal government on… oil exports, [as well as] security and border protection, including land and air entry points,” the unnamed Iraqi official added.

Iraqi Prime Minister Haider al-Abadi has already demanded the annulment of the referendum.

During a recent press conference in Paris, Abadi said his government did not seek confrontation with Iraqi Kurds, but reiterated Baghdad’s position that the vote was illegal and that problems should be solved within the framework of Iraq’s constitution.