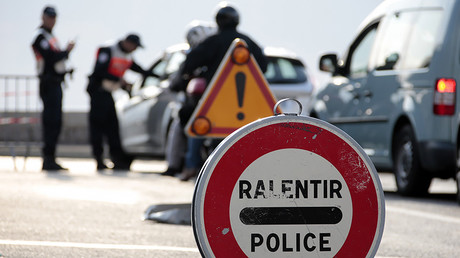 The French senate approved the new anti-terrorism law on its second reading on Wednesday. The new law, set to increase law enforcement powers in the fight against terrorism, was supported by 244 senators, with only 22 voting against it. The bill was overwhelmingly approved by the lower chamber of parliament earlier in October.

The state of emergency was imposed in France to combat terrorism in the wake of the deadly 2015 Paris terrorist attacks, and has been extended six times since. It is set to finally expire on November 1.

Its key points include allowing the authorities to search homes of those suspected of terrorist links, while holding them for up to four hours and seizing data, items and documents. It also allows the authorities to confine suspects to their town or city for up to a year and have them report to police every day. Any movement beyond that requires them to wear a tracking bracelet.

Top regional officials will be allowed to shut down places of worship for up to six months, if they deem preachers have incited attacks or glorified terrorism. This can be done without any hard proof obtained by police, but simply on the basis of "ideas and theories" shared by the preachers’ devotees.

Police are also granted the authority to stop and search people at vulnerable areas such as borders, train stations and airports.

Ahead of the parliamentary vote, French President Emmanuel Macron hosted 500 law enforcement officers including police, gendarmes, prefects, and other officials at the Elysees Palace. Macron defended the new law and mulled a new nationwide anti-radicalization plan.

“The first mission of the state is to protect our fellow citizens and ensure the security of the territory... We have to adapt our organization, our action,” he said.

The plan includes hiring 10,000 more police officers and gendarmes, as well as supplying them with technology suitable for the “smartphone era.” He also promised to implement stricter measures to more efficiently deport migrants with “no legal right” to stay in France.

“We don’t welcome people well, our procedures are too long, we don’t integrate people properly and neither do we send enough people back,” Macron told the law enforcement officers.

'Institutional racism against the Arab-Muslim community'

“If you are going to give police this power, they are going to discriminate communities that are already alienated, putting potentially more recruits into the hands of these death squads,” Glazebrook said, arguing that the French police have “a serious problem with institutional racism and brutality against the Arab-Muslim community” going back to the Paris massacre of 1961, when dozens of Algerians were killed in a police crackdown on the protest against the Algerian War on the River Seine.

The key to reducing the threat posed by international terrorism is to deal with the underlying causes of the Islamist violence and not with its consequences, Glazebrook said.

“If you don’t deal with the root causes, which is the brutal foreign policy on the one hand and the alienation of entire communities due to system institutional discrimination and racism… even the most vicious police state will not be able to stop there being some people who decide to lash out.”

“You can’t be a near-colonial war-mongering power like France and expect to be permanently immune to the blowback and to the consequences of that,” Glazebrook said, referring to France’s involvement in Libya and Syria.

The provision of the law enabling police to shut down suspected terrorist hotbeds without any proof may result in crackdowns on any dissent, thus eroding civil freedoms, former British intelligence officer Annie Machon told RT.

“What is radicalization? At the moment, of course, everyone in France is focused on the concept of Islamic radicalization, but what if that term spreads, what if there is mission creep, so someone who protests against the government is deemed to be radical and therefore be closed down?” she said, noting that French ecological activists used to be targeted by the state under similar pretexts.

Calling the concerns that human rights groups voiced about the law infringing on democracy “absolutely right,” Machon said that bulk data collection and mass surveillance envisioned in the law have proven to be ineffective means in combating terrorism.

She went on to note that while many of the terrorists that mounted attacks in Europe “have already been known to the authorities” it did not help security services to stop them.

“They are drowning in the tsunami of information rather than doing targeted specific investigations into people who might be particularly focused on committing terrorist atrocities… they are falling through the gaps of intelligence agencies.”