TEHRAN, October 21 - No story this week garnered more controversy than Trump's phone call to the family of a dead US serviceman. On October 4, Army Sergeant La David Johnson was killed in an ambush along with three other soldiers in Niger. 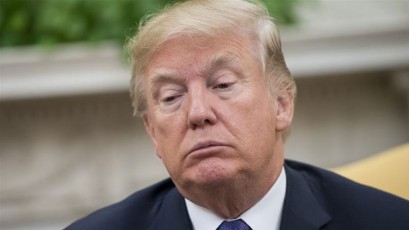 TEHRAN, Young Journalists Club (YJC) -TRUMP'S NIGER DEBACLE - No story this week garnered more controversy than Trump's phone call to the family of a dead US serviceman. On October 4, Army Sergeant La David Johnson was killed in an ambush along with three other soldiers in Niger.

For nearly two weeks, the president, who spoke publicly many times about his love for those in uniform, was silent. No written statements, no Tweets, no public acknowledgement of their deaths.

On Monday, things took a different turn. Reporters asked him why he hadn't said anything or contacted the families of those who died. He said he would call them and then took it up a notch. Referring to past presidents, singling out former President Barack Obama, Trump told reporters: "Most of them didn't make calls."

A former Obama official signaled the political hurricane that was about to hit by calling that statement false. Photos of past presidents hugging and consoling families who lost loved ones in battle were shared on social media, effectively countering Trump's false claim.

It got worse. On Tuesday, Trump phoned Johnson's widow. According to Congresswoman Frederica Wilson, a family friend, Trump told Myeshia Johnson, in reference to her deceased husband, "He knew what he was getting into". Wilson was listening to the call and said the president's words were insensitive.

The next day, Trump denied he ever said them, claiming on Twitter he had "proof". On Thursday, retired General John Kelly, Trump's chief of staff, took a proverbial bullet for Trump at the White House briefing, saying he told him to say, "he knew what he was getting into," effectively proving that Trump lied about the conversation.

He then attacked Congresswoman Wilson for revealing the details of the call. The Pentagon continues to investigate what happened in Niger.

JOHN KELLY'S SON - The Niger debacle was not just a problem for General John Kelly on a professional level but on a personal level, too, thanks to his boss.

Kelly's son, a US Marine, was killed in Afghanistan in 2010. As the controversy swirled around Trump's comments about other presidents not making calls, he flippantly mentioned to reporters to "ask General Kelly" if he got a call from Obama after his son died.

Kelly didn't get a call. Trump's stoic chief of staff, who rarely speaks in public about his son's death, later clarified why Trump said that. "He asked me about previous presidents," Kelly told reporters on Thursday.

"And I said, I can tell you that President Obama, who was my Commander-in-Chief when I was on active duty, did not call my family. That was not a criticism. That was just to simply say, I don't believe President Obama called."

In other words, Trump blurted out something Kelly had told him in a private conversation.

JUDGE BLOCKS TRAVEL BAN - For the third and fourth time this year, US judges blocked Trump's travel ban, which has been heavily criticised as an attempt to keep Muslims out of the US.

During the campaign, Trump told supporters he wanted a Muslim ban but since becoming President, his administration has insisted his executive orders are based on national security and not religion. But the judges clearly disagree.

The latest rulings provide even more proof that the President's tweets, and his popular say-whatever-I-want style, have real consequences. In his decision on Wednesday to block the ban, Maryland Judge Theodore Chuang notes a September 17 tweet in which Trump criticises efforts to water down his original travel ban.

"The travel ban into the United States should be far larger, tougher and more specific-but stupidly, that would not be politically correct!" Trump tweeted.

It is public statements like these that led the judge to issue the ruling even noting that in spite of a recent proclamation by the president, which added Venezuela, Chad and North Korea to the ban, "on its face, the Proclamation is not entirely independent of the President’s history of public advocacy for a Muslim ban".

TRUMP'S HILLARY OBSESSION - During his Monday Rose Garden press conference, Trump repeated something he has said before about his former opponent: "Hillary, please run again." His request for Clinton, the 2016 Democratic presidential nominee, could be interpreted equally as a taunt since Trump believes he can beat her again.

On Wednesday, Clinton confirmed she would not be running in the 2020 US election telling BBC radio: "I think I'm in a position where my voice will actually be magnified because I am not running." But that wasn't his only Clinton taunt.

On Twitter, Trump also tried to get the US media to report on a debunked story claiming the Clinton Foundation benefited from a uranium deal with Russia, an effort by the president to fire up his base and get reporters off the scent of the ongoing FBI investigation into the Trump campaign's alleged collusion with Moscow.

So far, conservative media outlets have been the primary proponents of the story.

WILL THE US JAIL REPORTERS? - Maybe. At a Senate hearing on Wednesday, US Attorney General Jeff Sessions was asked about past comments suggesting the Department of Justice might go after journalists who refuse to reveal confidential sources.

Democratic Senator Amy Klobuchar asked Sessions this: "Will you commit to not putting reporters in jail for doing their jobs?" Sessions would not commit. "I don't know that I can make a blanket commitment to that effect," he replied.

Sessions' comments come at a particularly tense time between the media and the White House. Trump has repeatedly referred to anyone who doesn't say nice things about him "fake news" and has labelled journalists "the enemy".

The US government has gone after journalists in the past. During the administration of George W. Bush, New York Times reporter Judith Miller went to jail for three months for refusing to reveal her source while investigating a story about the CIA that angered the administration.