TEHRAN, October 25- A petition circulating on social media calling for Jordan's controversial nationality law to be abolished is likely to be refused in parliament, activists say. 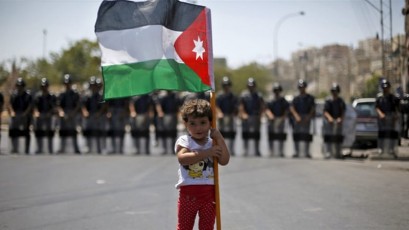 TEHRAN, Young Journalists Club (YJC) -A petition circulating on social media calling for Jordan's controversial nationality law to be abolished is likely to be refused in parliament, activists say.

The petition, which has so far received 3,800 signatures, will be presented to the Jordanian parliament once it gathers 5,000 signatures.

But "it is not at all that simple", says Aroub Soubh, a Jordanian activist.

Soubh has been working with civil society groups and NGOs on a campaign tackling what he describes as Jordan's "sexist" nationality law.

A campaign entitled "My mother is Jordanian and her nationality is my right" - established by late women's rights activist Nima Habashna - has branched out into a grassroots project by a coalition of local rights groups called "Citizenship is my family's right".

"Those who started the petition unfortunately did not approach us," said Soubh, spokesperson for the coalition.

"They're calling for the abolishment of law, which is not exactly possible. As a coalition, we spent several years researching the issue's legality and ways in which we can actively campaign towards a solution – and what we have come to now is the farfetched possibility of amending article six of the constitution," Soubh explained.

Implemented in 1954, the Jordanian nationality law defines nationality first through a "blood bond", derived from the father's citizenship to those born to Jordanian fathers and foreign mothers.

However, the same rights are denied when a mother is Jordanian and the father a foreign national.

Government figures estimate that approximately 89,000 Jordanian women are married to non-Jordanians. In those cases, the husband is usually Palestinian, Egyptian, Syrian, or Iraqi.

About 360,000 children, therefore, remain without citizenship.

"We called for two things – amending the law, which in reality does not even mention women, rendering it unconstitutional based on its biased nature," said Soubh, explaining that Article 6 of the Constitution stipulates that Jordanians have equal rights and duties before the law.

"We wanted to approach the constitutional court and ask for an explanation to the word Jordanian – is it male, female, or both?" she added. "And another idea was to ask for an amendment, to add the word gender – so as not to discriminate on the basis of race, religion, or gender."

The demands of the coalition were refused last year, but Soubh says they are determined to continue their fight.

"This fight has been ongoing for decades," said Soubh. "We have to better strategize and reevaluate our next steps at this point…We have always been told, that this is a matter of a top-down approach."

'It all goes back to the Constitution'

Khaled Ramadan, a Jordanian parliamentarian who worked alongside the coalition and pushed to move the debate forward since taking office in 2016, told Al Jazeera: "It all goes back to the Constitution".

"When I was a member of the royal dialogue committee, we proposed to amend article six of the constitution to include the word gender - but this was completely refused," he said.

The Jordanian National Charter, introduced in 1990 with the objective of progressing to "democracy on a stable foundation" has been adopted by all of the country's ministries, "is not in equal par to the constitution" says Ramadan.

"Though an article in the charter stipulates that Jordanians, whether male or female, are equal in front of the law- the charter is not constitutional and thus cannot be used as a legal basis to change the reality on the ground," he explained.

According to Ramadan, the charter formed the basis for the movement and the campaign, which has thus far managed to obligate the government to offer an alternative solution.

In 2014, Jordan's government passed a bill that entitles foreigners with Jordanian mothers in the country to "service-related privileges".

Provided that their mothers have been residing in Jordan for at least five years, children of foreign fathers have the right to free high school education and health services in government hospitals, second priority after Jordanian citizens in all professions, and exemption from any work permit fees.

The bill also allows them to own property, make investments and obtain a driving license. It is also intended to offer temporary residency permits, subject to yearly renewal.

But Ramadan says the privileges available in reality are just 10 percent of what was promised, and these are not guaranteed by law.

After spending thousands on his education to fulfill his dream of becoming a civil engineer, Araby says he now works as a sales representative in a private firm and has not been able to find a job elsewhere.

"Ever since I turned 18, I've been trying to live a dignified life," he told Al Jazeera. "And this still hasn't happened because I don't even have a national identification number."

Earlier this month, Araby's bank accounts were frozen without warning. He was told to provide his bank with a work permit, a task he thought was easy to accomplish.

"I told them [labor ministry] I had the privilege card, and I gave them my university degree. They said they cannot issue me a work permit with engineering as my occupation – instead, they wanted to put me down as a labour worker, but I refused," he said.

"The so-called privileges card, which lacks a national identification number, is not even recognisable by police officers and public sector employees," he added. "

How are they supposed to take me seriously anywhere in this country?"

Similarly, campaign coordinator Rami Al Wakeel, said that nothing has changed in reality.

"Investments need a lot of capital, and still have to be administered by a Jordanian national," said Wakeel.

"Only 66,000 people received these privileges cards, while 6,000 applicants were rejected due to the strict conditions that are in place," he added. "You can't even use these cards to open bank accounts. You can't even donate blood to your own mother without a proper identification number in this country."

"The bureaucracy involved is complex and endless," he said.

As a result, most of the affected people, like Araby, end up working in the private sector where almost no official paperwork is involved.

Even if a permit is granted, it is "only valid for one year – and could be rejected on basis that a Jordanian national needs the job instead," said Wakeel.

According to parliamentarian Ramadan, the "least complicated" option being explored, is for legislators in the senate to call on the constitutional court for an in-depth explanation of what the term "Jordanian" means in Article 6.

However, most of the senate's members are not "socially mature" enough to take this step on behalf of the NGOs and affected people, he explained, and for such a move to materialise, it would require extensive pressure from the public.

Traditionally, arguments that go against the call for equal nationality rights are often attributed to the large presence of Palestinian refugees in the country. Thus, legislators argued that granting Jordanian citizenship to children of Palestinian fathers could have changed the country's demographic.

Today, with the inflow of Iraqi and Syrian refugees, Jordan hosts more than 2.5 million refugees. This, says Ramadan, is going to "make the fight even harder".