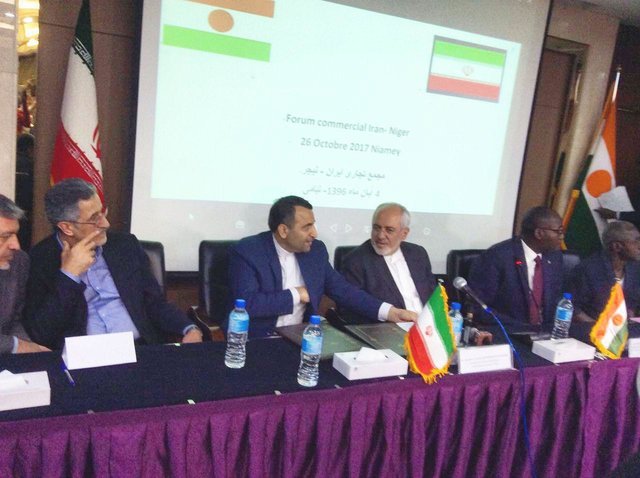 TEHRAN, Young Journalists Club (YJC) - “Iran and Niger have the required will to expand bilateral ties,” Zarif said in a meeting after opening the trade center.

Zarif held meetings with senior officials in Niger’s capital, ending a three-leg tour of Africa, which earlier took him to South Africa and Uganda.

During the high-level talks, senior Iranian and Nigerien officials laid emphasis on the expansion of bilateral political, economic, and trade ties and discussed regional and international issues, especially fighting terrorism.

The visit also witnessed a meeting of Iran-Niger Trade Conference. Speaking at the meeting, Zarif said, “We are prepared to cooperate in the areas of trade, commerce, investment and transfer of technology.”

“The flagship of Iran’s science and technology sector has attended the meeting, and will waste no time in cooperating with Niger in the area of transferring technology,” he noted.

Zarif further hailed the progress in Tehran-Niamey cooperation in the health sector, stressing that the two sides could work together “in the areas of technology and engineering as well as auto industry in the future, too.”

The Nigerien foreign minister, who was also present at the meeting, said, for his part, that his country welcomed expanded operation there by Iranian enterprises.

Iran and Niger, he said, have been enjoying diplomatic relations for more than 40 years, adding that the presence of a high-ranking economic delegation in the African country indicated a promotion of bilateral ties.

Zarif left the capital Tehran for South Africa at the head of a ranking political and economic delegation on Saturday night.

He travelled to Pretoria, the country’s administrative capital, at the invitation of his South African counterpart Maite Nkoana-Mashabane.

The visit featured the 13th gathering of the countries’ Joint Commission, as well as meetings with the host nation’s president, Jacob Zuma, and Finance Minister Malusi Gigaba. The event addressed the implementation of standing agreements between the two sides.

Zarif’s next stop was Uganda, where he likewise addressed expanding of bilateral political and economic relations.

The Uganda stay witnessed inauguration of a 50-bed hospital financed by the Islamic Republic.