Fight the heat with its tiny seeds

Tehran, YJC. Sisymbrium irio is traditionally drunk in Iran for cooling off in hot summer days. 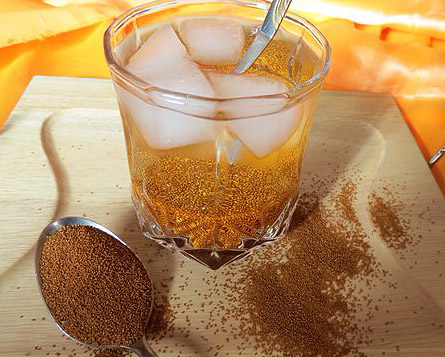 Take a pitcher and pour some water in it, add in the Sisymbrium irio seeds and then a little sugar, lime juice, and rose water; and don’t forget the ice. That’s the recipe to a super-cool cool-down in a hot day.

The seeds are tiny and oblong and bright brown in color. The drink made in the way told above is a gift from the previous Iranian generations.

Food expert Farzad Babaei says that as heat increases the body’s metabolism, perspiration heightens and, as a result, the body loses water. "Losing water is accompanied also with loss of some electrolyte. Because Sisymbrium irio contains some amounts of potassium, it can make up for the electrolytes lost.”

He says that the traditional medicine holds that Sisymbrium irio is cool in nature.

"Sisymbrium irio is often used as sherbet, but one must avoid making it too sweet, because it may increase the blood density,” Babaei adds.