Will Mandela go to heaven?

Tehran, YJC. These days hearts worry over what will happen in a certain place in South Africa, a hospital where Nelson Mandela lies.*

Javidan Qorbanuqli writes in Bahar "In the past days the worried eyes of tens of millions of the people of South Africa are fixed to the announcements by the presidential spokesman and news from the Mandela family of his dire conditions. It can be discerned from news that the world must prepare itself for the bitter moment of faring Mandela well.”

Qorbanuqli adds that SAPA has published a photo last week in which entities visit Mandela in hospital. He believes that the photos show that Mandela’s relatives are called across South Africa to visit him and to discuss the course of events in the days to come. 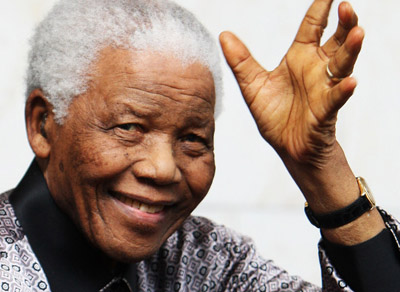 He states "No doubt the death of Mandela will be a great pain not only for South Africa but for the world. In some days the world will say farewell to one who must be called the most well-known and most influential political figure of the world in the past few decades. Mandela is a legend who reached the highest points of glory which are the subjects of aspiration for every politician, and did not step out of the ethic principals which he was bound to, even for a second at the height of power and fame.”

"Mandela spent 27 years of his life in the apartheid regime cells, 18 of which was spent on Robben Island, one of the most dreadful prisons of the regime. Torture, deprivation of freedom and most basic human rights were unable to build hatred and the thought of revenge inside Mandela. A close friend of Mandela once said ‘He had no hard feelings even for his enemies,’” Qurbanuqli continues.

Such tortures made of him a paragon of kindness and love even for his enemies. A great sign of the pious and the dwellers of heaven mentioned in the Quran is that God has taken hatred away from their hearts. The key to Mandela’s immortality must also be sought in this trait of his, which he left as a tradition.

What Mandela took on as his lifelong characteristic is in unison with man’s nature. It is a sound analogy that one of our great figures has compared Mandela’s tradition to that of the prophet Muhammad.

* Attention: This article was written a few months before the death of Mandela, but it released coincided with his ​​death
Share to
Related News
Nelson Mandela died
Mandela unable to speak: ex-wife
Tribute to Nelson Mandela held in Tehran - IN PHOTOS
AP: Nelson Mandela discharged from hospital; condition still critical
Mandela should apologise before he dies: Youth Activist
Hajjarian asks Khatami to attend in the ceremony of Mandela's grandeur
Will Mandela go to heaven?
Mandela's condition unchanged : S. Africa Government
Mandela back in hospital with lung infection
Tags
mandela ، heaven ، qorbanuqli
Comments
Published: 1
Under Review: 0
Peter
|

|
0
0
Answer
I hope that he is now in heaven for the eternal life that we greatly hope for.Amen
Your Comment