TEHRAN, November 4 -The US government has released a new report on climate change that flatly contradicts much of President Donald Trump’s position on the phenomenon. 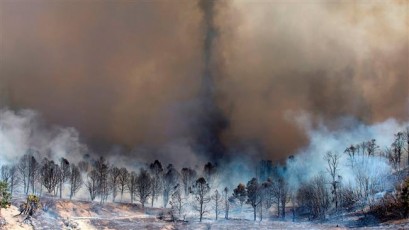 TEHRAN, Young Journalists Club (YJC) -The US government has released a new report on climate change that flatly contradicts much of President Donald Trump’s position on the phenomenon.

The government’s National Climate Assessment, prepared by scientists from 13 federal agencies, was released on Friday after it had been overseen by the White House.

It gives no alternative explanation for the changing climate other than "human activities,” a finding that is inconsistent with the Trump administration’s assertion that there is no link between pollution and rising temperatures.

"This assessment concludes, based on extensive evidence, that it is extremely likely that human activities, especially emissions of greenhouse gases, are the dominant cause of the observed warming since the mid-20th Century. For the warming over the last century, there is no convincing alternative explanation supported by the extent of the observational evidence," the report said.

“This is the most comprehensive assessment of climate science currently available in the world, and it reaffirms what we’ve already known,” said Robert Kopp, one of the lead authors of the report.

“If we want to do something like stay under 2 degrees Celsius of warming, the window to do that is closing in the next couple decades,” added Kopp, who is also a professor of climate science at Rutgers University.

The two-degree limit is an approximate target the United Nations uses to signal the point where dangerous climate change begins.

The White House issued a statement shortly after the report was made public, saying the administration "supports rigorous scientific analysis and debate and encourages public comment on the draft documents being released today."

Trump, who has called climate change a Chinese “hoax,” pulled the US out of the Paris Agreement on climate change in June, a year after his predecessor Barack Obama signed it.

During his election campaign, Trump had said he would "cancel" the accord in his first 100 days as president in order to save the declining coal industry in the US.

He called the deal unfair to American workers and said it stifled production and imposed burdens on the country.

The Paris Agreement entered into force on November 4, 2016 and has been signed by 197 countries, of which 135 have now formally ratified it, which represent more than 75 percent of global greenhouse gas emissions.