Activists: Women participating in US politics in record numbers

TEHRAN, November 5 -Women are running for office in record numbers and at every level after the election of President Trump and recent sexual scandals by elite figures across the world, according to numbers from top women advocacy organizations. 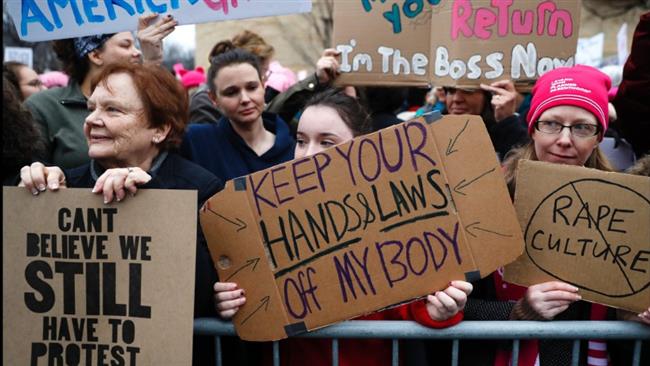 TEHRAN, Young Journalists Club (YJC) - More than 15,000 women have contacted She Should Run — a nonpartisan organization dedicated to recruiting and training women to run for elected office — since last November. More than 19,000 have also contacted EMILY's List, a group that helps get Democrat women get elected.

She Should Run is launching a radical campaign to achieve gender parity among elected officials by 2030. The campaign, called "250kBy2030," aims to have women make up half of the 500,000 elected positions in the US within a little less than 13 years.

Currently, women account for less than 25 percent of those positions and previous research suggests it would take approximately 100 years to achieve gender parity in these.

Trump’s inappropriate rhetoric and actions in regards to women is not the only incident that has sparked women’s increased activism. Women have also mobilized and banded together in the wake of an avalanche of accusations against elite media and political figures.

Sexual allegations against Democratic donor and film mogul Harvey Weinstein have sparked a wave of sexual harassment and assault revelations in various industries, including in state and national legislatures.

In another scandal in the media world, former Fox News host Bill O’Reilly secretly settled a sexual harassment allegation with a network contributor for a whopping $32 million.

Six women, including actress Olivia Munn, have come forward alleging that Hollywood director Brett Ratner sexually harassed or assaulted them in private homes, at industry events and on movie sets.

Political journalist Mark Halperin was recently accused by multiple female colleagues of sexual harassment over the years, prompting him to issue a public apology for the “pain and anguish” he inflicted on his victims.

Writer Anna Graham Hunter claimed in a column published by The Hollywood Reporter on November 1, 2017 that Dustin Hoffman, now 80, groped her on the set of a TV movie when she was a 17-year-old intern in 1985.

Women in the US have recently been coming forward to share encounters of sexual harassment and assault in the workplace, including in the media and entertainment industries as well as the realm of politics.

Nearly half of all employed women in the United States say they have received an unwelcome sexual advance or other verbal or physical harassment of a sexual nature at work, according to an October NBC News/Wall Street Journal poll.