Trump says guns not to blame for Texas massacre

TEHRAN, November 6 - US President Donald Trump said the United States was living in "dark times" as the country grieves a church massacre in the state of Texas that left 26 people dead, but he insisted the latest gun violence tragedy cannot be blamed on firearms. 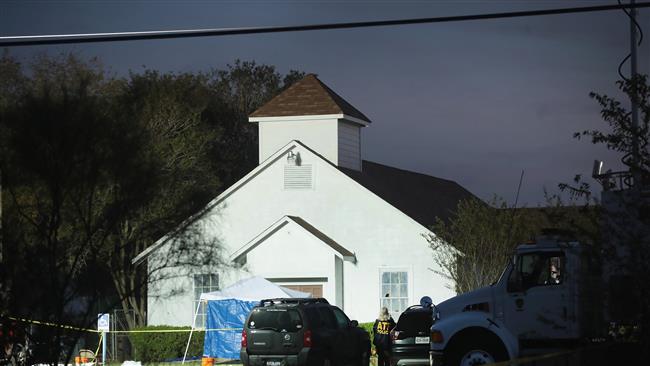 TEHRAN, Young Journalists Club (YJC) - At least 26 people died and 20 others were wounded Sunday when a gunman wearing a bulletproof vest opened fire at people inside a church in Sutherland Springs, a small town near San Antonio.

Sunday's massacre saw a gunman wearing a bulletproof vest use an assault rifle to open fire on the congregation of a small-town Texas church, killing 26 people and wounding 20 more.

It came just five weeks after the mass shooting in Las Vegas, the worst gun massacre in modern US history.

Speaking on Monday in Tokyo as part of his Asia tour, Trump described the gunman as "deranged" and said the most recent mass shooting to hit the US "isn't a guns situation."

"I think that mental health is your problem here," the US president told journalists when asked if gun control could reduce the rampant firearms violence plaguing the US.

The victims, who ranged in age from five to 72, were killed at First Baptist Church in Sutherland Springs, a rural community of some 400 people.

The gunman was later identified as a former US Air Force member named Devin Kelley.
Kelley lived in New Braunfels, Texas, and had served in the Air Force at a base in New Mexico. He was found dead in his vehicle after being confronted by a local resident.

Texas Governor Greg Abbott says he does not believe the deadly church shooting was “a random act of violence.”

Speaking to ABC’s “Good Morning America” on Monday, Abbott said he thinks a “connection” between the suspect and the church where the attack occurred will soon emerge.

“What I want to convey to you is I don’t think this was just a random act of violence,” Abbott said.

“It was two things, one is a very deranged individual who I understand long before he was dishonorably discharged from the United States military was demonstrating some mental illness challenges,” he added.

Wilson County Sheriff Joe Tackitt told CBS News in an interview on Monday that after the shooter left the church, two local residents, at least one of whom was armed, chased him in their vehicles and exchanged gunfire, and Kelley crashed his car and shot himself to death.

"At this time we believe that he had a self-inflicted gunshot wound," Tackitt said.

The US Centers for Disease Control and Prevention (CDC) estimates that 970,622 people in the US were killed or injured by a firearm from 2006 to 2014.

Gun violence is the third-leading cause of accidental death in the US, behind drug overdoses and automobile crashes.