TEHRAN, November 7 - The head of the International Atomic Energy Agency (IAEA) has once again hailed Iran for remaining fully committed to the terms of its 2015 nuclear agreement with six world powers, amid global concerns over American threats against the landmark pact. 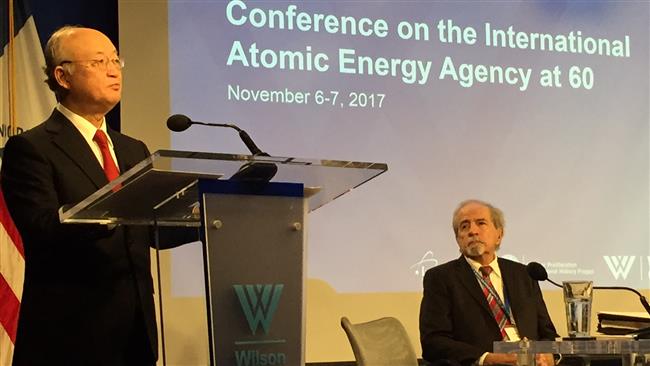 “Now, almost two years since Implementation Day (January 16, 2016), I can state that the nuclear-related commitments made by Iran under the JCPOA are being implemented,” Amano said, using the acronym for the Joint Comprehensive Plan of Action as the deal is officially called.

The IAEA, he said, was tasked by the UN Security Council with monitoring Iran’s compliance, adding that the nuclear watchdog “is not a party to the agreement, but we played a key role in bringing it about.”

The IAEA chief also emphasized that the Islamic Republic has “agreed to additional transparency measures” under the nuclear accord, and that the agency’s inspectors have “expanded access to locations.”

“Iran is now subject to the world’s most robust nuclear verification regime. It has committed itself to fully implementing its comprehensive safeguards agreement and is provisionally applying the Additional Protocol,” he added.

Elsewhere in his statement, Amano touched on his recent visit to Tehran.

In meetings with Iranian President Hassan Rouhani, Foreign Minister Mohammad Javad Zarif and head of the Atomic Energy Organization of Iran Ali Akbar Salehi, “I requested them to fully implement Iran’s nuclear-related commitments under the JCPOA. They reaffirmed their determination to do so,” he pointed out.

The JCPOA was reached between Iran and the P5+1 countries — namely the US, Russia, China, France, Britain, and Germany — in July 2015. Under the deal, Iran undertook to apply certain limits to its nuclear program in exchange for the termination of all nuclear-related sanctions against Tehran.

Eight IAEA reports have so far confirmed Iran’s full commitment to its side of the bargain.

However, Washington, under President Donald Trump, has at various times attempted to either scrap the agreement or open renegotiations to change its terms. Those attempts have faced stiff opposition from all parties to the deal.

On October 13, Trump, who took office one year after the JCPOA had come into force, defied all IAEA reports and refused to formally certify that the Islamic Republic was complying with the accord under a domestic US law, warning that he might ultimately “terminate” it.

Trump further said he was directing his administration “to work closely with Congress and our allies to address the deal’s many serious flaws.” The US Congress now has until mid-December to decide whether to re-impose the economic sanctions on Tehran that were lifted under the accord.

This is while all other signatories to the JCPOA, along with the entire international community, have announced their support for the deal and censured any move that could harm it.