TEHRAN, November 7 -A Hong Kong court on Tuesday allowed three jailed young activists, who spearheaded pro-democracy protests that brought much of the Chinese-ruled city to a halt in 2014, a final chance to appeal against their sentences. 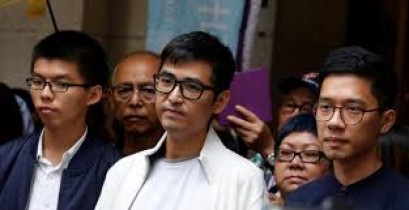 TEHRAN, Young Journalists Club (YJC) -A Hong Kong court on Tuesday allowed three jailed young activists, who spearheaded pro-democracy protests that brought much of the Chinese-ruled city to a halt in 2014, a final chance to appeal against their sentences.

The three are serving six, seven and eight-month jail terms, respectively but have been released on bail.

Hong Kong has been governed under a “one country, two systems” formula since its return from British to Chinese rule in 1997, allowing freedoms not enjoyed on mainland China that include an independent judiciary but not a fully democratic vote.

In a short hearing on Tuesday, Hong Kong’s Court of Final Appeal granted the trio leave to appeal, with the case to be heard on January 16 with the three to remain on bail until then.

The next legal steps will likely be scrutinized closely, with the jailings having shaken confidence in Hong Kong’s vaunted rule of law.

Wong, Chow and Law were sentenced last year to community service for unlawful assembly. However, Reuters reported that Justice Secretary Rimsky Yuen had overruled other senior colleagues to re-open the case and push for a harsher sentence that eventually led to their imprisonment.

“I know the world is having their eyes on us to see whether the judges, our legal professionals, will restore the confidence of our jurisdiction. Or whether it will smash the confidence of the people, not only in Hong Kong but also around the world,” Chow told reporters.

“The verdict given in the future will matter a lot and will redefine whether our constitution - the Basic Law - will value civil liberties more or control stability as claimed by the government.”

U.N. human rights experts urged Hong Kong to respect the rights of the trio, including the legal right to peaceful assembly under the International Covenant on Civil and Political Rights, to which Hong Kong is a party. [nL5N1NC5AF]

“We fear that if their sentences are upheld, this will have the effect of stifling the expression of dissenting opinions, the right to protest and the overall work of human rights defenders,” David Kaye, U.N. special rapporteur on the right to freedom of opinion and expression, and Michel Forst, U.N. special rapporteur on the situation of human rights defenders, said in a joint statement from Geneva on Monday.

“We call on the Hong Kong authorities to respect the independence of judicial powers and the rule of law.”

On Saturday, China’s largely rubber-stamp parliament formally extended a law banning disrespect of the national anthem to cover Hong Kong, another example of a move that critics have said undermines the Chinese-ruled city’s freedoms.