TEHRAN, November 9 - The speaker of Catalonia's sacked parliament Carme Forcadell has appeared in court in the latest legal case brought against separatist leaders of the region. 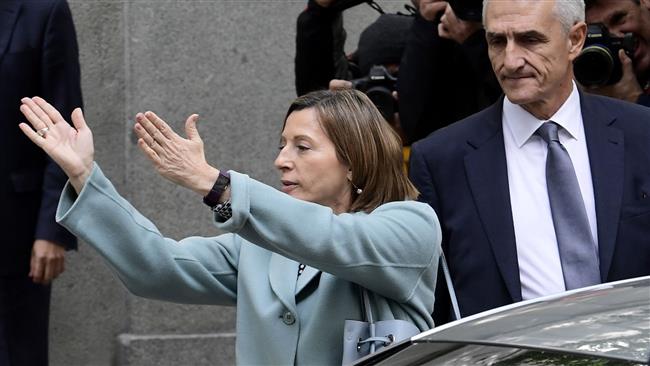 TEHRAN, Young Journalists Club (YJC) - Forcadell and five members of the region’s dismantled parliament testified before a Spanish judge over claims that they ignored Constitutional Court orders and allowed an independence vote in Catalonia's regional parliament.

The court will rule whether to detain the six defendants on charges of sedition, rebellion and misuse of public funds after Catalan lawmakers voted last month to split from Spain while the investigation continues.

The Catalan parliament declared independence from Spain after holding a banned referendum on October 1, but the government of Prime Minister Mariano Rajoy suspended the region's autonomy, dismissed its parliament and government, and organised new regional elections for December 21.

Spain's Constitutional Court annulled the declaration of independence on Wednesday after it initially suspended implementation of the secession declaration.

Catalonia's deposed regional president, Carles Puigdemont, and four of his dismissed Cabinet members have fled to Brussels, where they are fighting Spanish arrest and extradition orders.

Last week, a court in Madrid ordered that eight other members of Puigdemont's sacked government be detained and tried for their role in the events. They could go to jail for up to 30 years if found guilty.

There are 7.5 million people in Catalonia who are divided over the independence bid. The rich region accounts for a fifth of Spain's GDP.