'A sizeable percentage of our budget was being stolen'

TEHRAN, November 10-Saudi Arabia's foreign minister has called for new international sanctions to be imposed on Iran for "its support for terrorism", as an escalating war of words between Tehran and Riyadh sends ripples across the region. 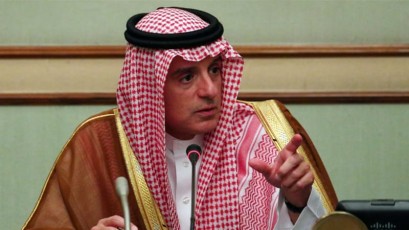 TEHRAN, Young Journalists Club (YJC) -Saudi Arabia's foreign minister has called for new international sanctions to be imposed on Iran for "its support for terrorism", as an escalating war of words between Tehran and Riyadh sends ripples across the region.

Adel al-Jubeir said "Iran is the number one state sponsor of terrorism" in an interview with US television network CNBC that aired on Thursday.

He condemned Iran for its ballistic missile programme and its support for Lebanese Shia group Hezbollah.

Asked whether Saudi Arabia was headed for a direct confrontation with Iran, he responded: "We hope not."

The comments come as Saudi Arabia faces accusations that it forced Saad Hariri, Lebanon's prime minister, to resign as a way to put pressure on Hezbollah and the group's Iranian backers.

Rumours abound that Hariri is being held under house arrest in the kingdom, a claim Riyadh has denied.

Asked whether the Saudis would directly confront Hezbollah, Jubeir said only that the kingdom was "looking at various options" about how to deal with the group.

"We cannot allow Lebanon to be a platform from which harm comes to Saudi Arabia," he told CNBC.

He said Saudi Arabia wants to "help the Lebanese people come out from under the thumb of Hezbollah".

Saudi Arabia and Kuwait on Thursday advised their citizens not to travel to Lebanon and urged those who are in the country to leave as soon as possible.

Jubeir said the Saudis' position vis-a-vis Hezbollah is in line with that of the Donald Trump administration and other regional allies, including Egypt.

He would not comment, however, on rumours that Saudi Arabia will work with Israel against Hezbollah.

"We are urging the Lebanese and the Lebanese government in particular to take firm and resolute actions against Hezbollah," Jubeir said.

With regard to the ongoing campaign of arrests targeting some of Saudi Arabia's richest people, including members of the royal family, Jubeir was asked about the possible consequences of the lack of transparency.

"The kingdom of Saudi Arabia announced more than two and a half years ago that it will fight corruption and fight it robustly."

In a statement issued on Wednesday, Saudi Arabia's Monetary Agency said the detentions, which are ostensibly aimed at ending corruption, would not affect businesses associated with those arrested.

Mohammed bin Salman, the Saudi crown prince, launched on Saturday a purge of his rivals within the royal family and the country's business elite.

"The public prosecutor started an investigation two and a half years ago and unearthed a large number of cases of individuals who are involved in corruption and the decision was made to bring these people in for questioning and to confront them with the evidence and to deal with this issue in a very resolute manner".

"I believe that the international community will be very, very pleased that the kingdom of Saudi Arabia is not only transparent, not only firm, but has actually taken decisive action against individuals who robbed public goods.

"And the reason the names have not been announced is that, under our legal system, we don't publicise names until after the verdicts are out. ...  this is a hugely important step for Saudi Arabia.

"Now foreign investors can come into Saudi Arabia and compete on an equal footing with everybody else."