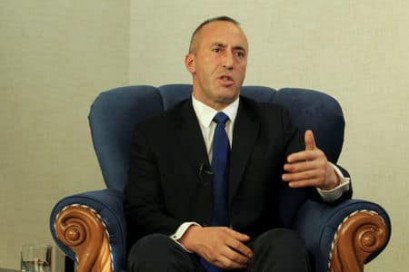 TEHRAN, Young Journalists Club (YJC) - Tensions between the states heightened early this year after Ramush Haradinaj, a former Kosovar guerilla leader who in September took over as prime minister, was arrested in France on an arrest warrant issued by Serbia. He was released after a French court rejected Belgrade's extradition request.

Western officials based in Kosovo's capital of Pristina, as well as local security officials, fear Haradinaj could be arrested if he travels abroad for official visits if the arrest warrant is not withdrawn.

A visit to Brussels next week, Haradinaj's second trip to a foreign country since he took over two months ago, will be the next test.

"Creating lists and accusing people with false evidences belongs to the dark times of the Serb state under (Slobodan) Milosevic,” Halil Matoshi, a political advisor to Haradinaj, said on Friday.

"This does not contribute to the dialog between Kosovo and Serbia as two sovereign and neighboring states and the normalization of the relations between Belgrade and Pristina."

In September Serbian authorities said that the arrest warrant against Haradinaj remains in place.

Kosovo seceded from Serbia in 2008. Both states want to join the European Union but Brussels says they must normalize relations before their applications can go ahead.

Both countries committed in 2013 to an EU-sponsored dialogue to resolve outstanding issues.

Serbia has charged Haradinaj with murdering Serbs in the late 1990s war. The 1998-99 conflict ended after NATO bombed the now-defunct Yugoslavia, then comprising Serbia and Montenegro, for 78 days to force a withdrawal of its troops from Kosovo and end a counter-insurgency campaign against ethnic Albanians.

Haradinaj, who has twice been tried and acquitted by the United Nations war crimes tribunal in the Hague, denies any wrongdoing.

Kosovo declared independence in 2008 but Serbia refuse to recognize its former breakaway province.

Backed by Russia and China, Serbia is blocking Pristina's membership in international organizations including United Nations and Interpol.

"Pristina is constantly sending requests to Interpol to remove his name from the red notice but unfortunately that is not happening," a senior Kosovo security source told Reuters.

"These are politically motivated charges but any police officer at any border post will see his name in red notice and it is his or her obligation to respect that notice."

Kosovo is not a member of Interpol and any request to add or remove Kosovar nationals to watchlists goes through an office of United Nations in Pristina.

A western diplomat in Pristina who asked not to be named said: "A quick solution must be found. This is a nonsense."