TEHRAN, November 10 - The secretary general of the Lebanese movement says Saudi authorities have clearly and openly declared a war on Lebanon by holding Prime Minister Saad Hariri hostage in the oil-rich kingdom, and forcing him to quit his post. 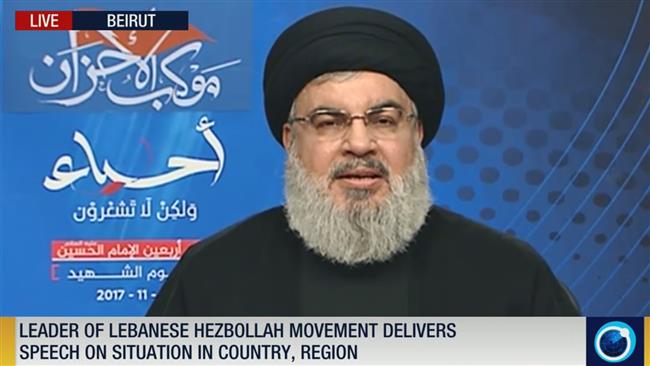 TEHRAN, Young Journalists Club (YJC) - Addressing his supporters via a speech broadcast live from the Lebanese capital city of Beirut on Friday afternoon on the occasion of Arba’een and Hezbollah Martyr Day, Sayyed Hassan Nasrallah stated that the 47-year-old leader of the Future Movement was invited to Riyadh without his advisors accompanying him, and then forced to announce his resignation as the head of the Lebanese government.

Nasrallah argued that Saudi officials have embarked on a campaign to flagrantly interfere in Lebanon’s domestic affairs, stressing that Hariri’s statement had been dictated by Saudis, who have put him under “house arrest.”

“Hariri is a prisoner in Saudi Arabia, and cannot return to his own country. Saudi Arabia is seeking to impose its will on the Lebanese government. It is trying to sow the seeds of discord among various political factions here and pit them against each other,” the Hezbollah leader said.

Nasrallah went on to say that Saudi Arabia has even appealed to the Israeli regime to launch a military onslaught against Lebanon in the name of fighting Hezbollah, and is ready to spend billions of dollars to attain this objective.

“Saudi wants to destroy Lebanon under the pretext of combating Hezbollah. It was the main architect of Israel’s war on Lebanon in the summer of 2006,” he pointed out.

The Hezbollah chief further censured Saudi Arabia’s “humiliating treatment” of Hariri, arguing that an insult to the Lebanese head of the government is an insult to the country’s nation and its political groups.

“Saad Hariri must be allowed to return to Lebanon as soon as possible. The Lebanese prime minister is in some sort of captivity in Saudi Arabia. His resignation is illegal and of no value since it was made under pressure,” Nasrallah pointed out.

He stated that Lebanese President Michel Aoun is wisely managing the country through the current political crisis, calling on all political factions in Lebanon to avoid brinkmanship, and strive to bolster cooperation.

Nasrallah also dismissed reports about an assassination plot against Hariri, emphasizing that the allegations were made by Saudis in a bid to mislead the world public opinion.

“Even the text of Hariri’s resignation statement had been written by the Saudis,” the Hezbollah chief underlined.

“Israel may push Takfiri militants to start a war against Lebanon. I don’t think Israelis would choose to get into a war with Lebanon following an act of cool calculation,” Nasrallah said.

“Saudi Arabia is afraid of facing Iran, and wants to take revenge of Hezbollah instead,” he commented.

Hariri announced his resignation in a televised statement on Saturday, citing many reasons, including the security situation in Lebanon, for his sudden decision. He also said that he sensed a plot being hatched against his life.

Hariri accused Iran and Hezbollah of meddling in Arab countries’ affairs; an allegation the two have repeatedly denied.

The Lebanese prime minister announced his resignation following visits to Saudi Arabia.
The resignation also comes less than a month after he announced plans to join a coalition government with the Lebanese resistance movement Hezbollah.

He became prime minister in 2016 after serving another term between November 2009 and June 2011.

Iran has vehemently rejected Hariri’s remarks, saying his resignation and rehashing of the “unfounded and baseless” allegations regularly leveled by Zionists, Saudis and the US were another scenario to create new tensions in Lebanon and elsewhere in the Middle East.

“The sudden resignation of Mr. Hariri and its announcement in another country are not only regrettable and astonishing, but also indicative of him playing in a court that the ill-wishers in the region have laid out,” Iranian Foreign Ministry Spokesman Bahram Qassemi said on Saturday.

Elsewhere in his speech, Nasrallah made reference to Saudi Arabia’s devastating aerial bombardment campaign against Yemen, saying the Saudi regime has failed to achieve its goals in the impoverished Arab country despite a lengthy war and a total blockade.

He brushed aside claims that Iran has provided Yemeni forces with missiles, stressing that Yemenis have been able to design and manufacture their own military hardware over the past years.

“Saudi Arabia claims to be helping Yemen but has only killed many people there and caused the spread of diseases as well as hunger,” Nasrallah said.

He added that Saudi officials have also failed in the face-off with Qatar, and their interference in Bahrain has made the Al Khalifah regime bankrupt.

“Bahraini officials now have to resort to Saudi Arabia and the United Arab Emirates in order to pay the salaries of their employees,” Nasrallah said.