TEHRAN, November 13 - Japan will delay a decision to develop a new advanced fighter jet, four sources said, as military planners struggle to settle on a design and officials splash out on new U.S. equipment such as ballistic missile interceptors and F-35 stealth planes. 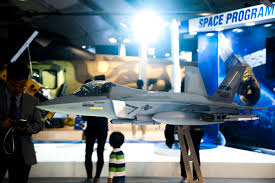 TEHRAN, Young Journalists Club (YJC) -Japan will delay a decision to develop a new advanced fighter jet, four sources said, as military planners struggle to settle on a design and officials splash out on new U.S. equipment such as ballistic missile interceptors and F-35 stealth planes.

Faced with a growing military threat from North Korea and increased activity by Chinese air force jets over the East China Sea, Japan is under pressure to improve its defenses on two fronts.

Any delay to the new fighter, known as the F-3, will raise a question mark over the future of what could be one of the world’s most lucrative upcoming military contracts, estimated at more than $40 billion to develop and deploy.

A decision after the first half of 2018 would be too late for it to be included as a core program in a new five-year defense equipment plan beginning April 2019 that Japan will reveal at the end of next year.

“The direction is for the F-3 decision to be put back,” said one the sources who have knowledge of the discussion. The people who spoke to Reuters asked not to be identified because they are not authorized to talk to the media.

They said the decision, on whether to forge ahead as a domestic program or seek international collaboration, would now likely come after 2018.

“Regarding the F-3 decision, including whether we will delay a choice, we have haven’t come to any conclusion,” a spokeswoman for the Ministry of Defence Acquisition Technology & Logistics Agency said.

Analysts estimate developing the F-3 could cost $40 billion, a figure described another source as an “initial cost.”

With a defense budget of around $50 billion that has increased in the past few years at just under an annual 1 percent, that outlay, even spread out over years of development, represents a major undertaking.

It would come at a time when Japan is spending a record amounts on U.S. equipment, including Lockheed Martin Corp’s F-35 jet, Raytheon defense missiles and Boeing Co and Textron Inc’s tilt-rotor Osprey troop aircraft.

For now, that defense is focused on countering the threat posed by North Korean ballistic missiles and nuclear weapons.

Japan’s defense forces, however, want the F-3 to counter growing Chinese air power in the skies over the western Pacific and East China Sea where Tokyo and Beijing are locked in a territorial dispute.

Japanese fighters scrambled a record 806 times to intercept Chinese planes in the year that ended March 31.

A second role for the yet-to-be-built fighter is to reinforce Japan’s defense industry by giving Mitsubishi Heavy Industries (MHI) and its suppliers their first fighter jet program since Japan built its F-2 fighter two decades ago.

Mitsubishi Heavy, the maker of the World War Two-era Zero fighter, in January 2016 tested a prototype jet, the ATD-X. Developed for around $350 million, it was seen as the first step toward a new homegrown frontline stealth fighter.

While support for a domestic-only program is strong among some government officials, other bureaucrats are worried about the potentially enormous expense of developing components from scratch. They support international collaboration to share costs with overseas partners and tap their technology.

“What we have now is a flying box” without all the systems that constitute a fighter such as weapons and sensors, said another of the sources.

Possible overseas partners include BAE Systems, a leading designer of the high-altitude Eurofighter interceptor backed by the British government, F-35 builder Lockheed Martin and Boeing, maker of the F-18 strike fighter. All have responded to initial requests for information from Ministry of Defence overseeing F-3 plans.